As the process goes on in Congress to save the United States from Obama's FY2011 blue-bag NASA budget, and Obama continues to find nearly zero support in either house, some unexpected and good byproducts are coming out.

Back in August I predicted, quite correctly, that our new leftest-in-chief would attempt to kill NASA. After all, that's every left-winger's dream and it has been so since 1966. I was incorrect, however, in thinking that the issue would be evenly split in the Congress- I was incorrect. I also predicted that with the Obama Administration and the Congressional spending sprees going out of control, the next Congress (which will likely be Republican dominated) will have no choice other than to repeal, defund and cut in order to save the nation- and that would include NASA. Both of my predictions were no-win situations for NASA.

On the first day of February, 2010 the Obama Administration dropped their bombshell on NASA and the nation in their FY2011 budget proposal. Congress, almost as a whole, was not impressed- in fact, they were highly insulted. The hand full of poly-sci. brains who came up with the plan were, like all liberals, sure that everyone would love their new plan and as usual- they were dead wrong.

From the on-going rhubarb over the Obama FY2011 NASA budget, some unexpected and positive results now appear to be emerging... that is... if you are not in the Obama camp.

First off- this attack on NASA Human Spaceflight has not only triggered wide spread feeling of disgust, but it has also drawn much needed attention to the lack of proper funding for the Human Spaceflight effort. The Congressional purse holders have universally stated that NASA needs more funding- and they mean beyond the crumb that Obama offered- which does not even keep pace with inflation. The most eye-opening statement came from Senator Mikulski when she made the point that we cannot keep having a new space program every four years with every new president.

Next there was my prediction that the next Congress will have no choice other than to cut, defund and repeal- and that must include NASA. A careful look at what the current members of Congress are thinking as well as what those who are looking to unseat the current members are saying shows that I am wrong- at least where NASA is concerned. The attitude now seems to be cut everything Except NASA. It is something I never thought I'd see in my lifetime. Additionally, Republican candidates running for Congress this year find this fully Obama-owned budget to be a nice handy political issue to be used in the upcoming elections. If they say that they want to cut NASA in any way- they can be linked as agreeing with Obama... a poison pill for any Republican and perhaps for any Democrat as well. Thus it is much more productive to simply disagree with the FY2011 NASA budget and let Obama take the heat.

The bottom line is that some unexpected good things are coming out of the attempt of the Obama Administration to castrate NASA. It is just a real shame that we have to go through so much doubt and agony to get to them.
Posted by Wes Oleszewski at 9:58 AM No comments: 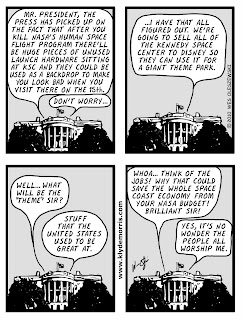 Posted by Wes Oleszewski at 3:47 PM No comments:

What will Obama say at KSC?

What will Obama say when he visits KSC on April 15th? That is the question that almost all of the spaceflight community is currently asking itself. Will he stand arrogantly by his budget to kill NASA's human spaceflight program, ignoring the outcry of the American people who oppose it- just as he did his health care takeover? Will he channel JFK and send our nation off on a bold new adventure to a specific place by a specific time? Will he do a verbal tap dance all around the subject while avoiding any commitments and then hop back on his 747 and blow back to the safe and friendly confines of the Washington beltway? Will he talk in billowing terms about vague but exciting sounding projects while actually offering only a few additional crumbs to NASA? Will he promise everything and then turn around and do nothing? What is going to happen? What will Obama do? Indeed, these are the questions.

Put all of the talk of which vehicle, what system, when and where, that is being debated in the spaceflight world aside, you will find my point of view about the whole matter. That is- why the hell should American citizens even have to wonder what is next for NASA or will NASA even exist after this president gets done with it? It is an absolute disgrace that we should be left in doubt at all. NASA is the cornerstone of our leadership in technology and innovation and the fact that it very existence under any sort of threat at all by any president is a national outrage.

So... what do I think Obama will say and do when he "visits" KSC for his space "summit" on April 15th? First off, he will surround himself with bootlickers who will fill the seats, then he will talk in billowing circles for 98% of the summit's allotted time allowing everyone else just enough time to sound-bite agree with whatever he says, he will then stand stubbornly by his toxic NASA budget and toss a crumb or two (such as a single shuttle flight extension) toward NASA and Senator Nelson before he tours the Space-X facilities and then he will smugly hop on Air Force One and fly away still in the firmly held belief that he can never be wrong and nothing that the United States does can ever be right.

This time, he will not win the Congress, however. There is widespread condemnation over his budget in both houses of Congress and among both Republicans and Democrats. Obama will have his NASA budget altered by the Congress in order to save NASA and keep NASA astronauts flying, and he won't even care. You see, NASA and America's manned space program means nothing to him, it is an annoyance to be handled by others- he's only coming to KSC because he was urged by Senator Bill Nelson to do something... anything, in the wake of his disastrous budget's release.

I only hope that I am totally wrong in this and that when it comes to NASA's manned spaceflight efforts, Obama really is "engaged" "enthusiastic" and "only has been ill-advised" as Bill Nelson has stated. And if I am wrong, I'll come here and say so- all four of you reading this will know. But... this is Obama, a president who never fails to let our nation down. On April 15th, I expect him to let us down once again.
Posted by Wes Oleszewski at 4:33 PM 1 comment: