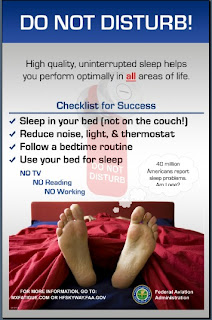 In the wake of the February 2009 Colgan Air 3407 accident the FAA Administrator made a "Call to Action" and one of the items to be addressed was supposed to be pilot fatigue.

Personally, I was more than highly skeptical. Even though a lot of blood had been spilled, which is normally the traditional motivation for the FAA to actually "do" something, fatigue is normally placed on the back-burner which is then turned off. As a pilot who flew at a number of different airlines and corporate operations and who many times found himself taking out the mask and sucking oxygen in order to stay awake during a late night approach and landing (like everyone else in the pilot groups), I found that the FAA did little more to address fatigue than sending out cartoon posters about the subject. I've seen pilots hosed by weather desperately trying to catch a well needed nap in ops. seated right below a poster warning all about the evils of pilot fatigue.

The problem is highly multifaceted with blame spread across aviation management, FAA weak rule making and pilot lifestyles. Management has had decades to worm through the loopholes in the current duty time reg.s and they are VERY good at it. They also have this fun way of basing pilots at out-stations, forcing people to commute to and from a crash-pad and home. In my day, the folks at screw-scheduling were experts at throwing a pilot right up against the wall of "duty time" because they know that such time ends when your flight is clocked "IN" and begins when they require you to "Report" for the next duty. You must get, by regulation 8 hours of rest in between. Forget that it may be a 40 minute wait for the crew van plus a 20 minute ride to the hotel and another 10 minutes to check in- that's all deducted from your 8 whole hours of required rest... plus the return to report, which takes just as long, also comes off of your end of the same 8 hours. Meals? HA! Who has time? Undress for bed, shower and re-dress... that comes out of the 8 as well and scheduling can still say they're legal. And even if they're not, report 'em to the FAA or even the union and see what happens... ZERO.

My favorite actually happened in corporate flying when I got a call from scheduling at 5 pm, and was informed that I had a report at 2 am for a 3 am departure the next morning. I had an hour drive from home, but forget about that, what about plain old sleep? They told me "Well just go to sleep right now." Ever try that? Just go to bed at 5 pm, simply lay down and try and fall asleep... in the daylight... doesn't work folks. But hey... they were legal under the reg.s. Oh... and by the way, they had those FAA "fatigue is evil" posters slapped up all over the place.

So, when it came to Admin. Babbitt's call to action and the subject of fatigue, I had very low expectations.... I was wrong.

Today the FAA released it's proposed rule changes for the issue of pilot fatigue and they are a real blitzkrieg on fatigue. Quoting Aero-News.net, "The proposal defines “flight duty” as the period of time when a pilot reports for duty with the intention of flying an aircraft, operating a simulator or operating a flight training device. A pilot’s entire duty period can include both “flight duty” and other tasks that do not involve flight time, such as record keeping and ground training. The FAA proposes to set a nine-hour minimum opportunity for rest prior to the duty period, a one-hour increase over the current rules. The proposed rule would establish a new method for measuring a pilot’s rest period, so that the pilot can have the chance to receive at least eight hours of sleep during that rest period. Cumulative fatigue would be addressed by placing weekly and 28-day limits on the amount of time a pilot may be assigned any type of duty. Additionally, 28-day and annual limits would be placed on flight time. Pilots would have to be given at least 30 consecutive hours free from duty on a weekly basis, a 25 percent increase over the current rules."

If Randy Babbitt can actually get these changes into the FARs, it will be a major improvement. It will cost the airlines a lot of that extra cash they're grubbing by charging for checked bags and may force companies to actually, heaven forbid,... hire more pilots. Safety may really be enhanced.
Posted by Wes Oleszewski at 9:39 PM No comments:

A quote from my brother Craig:

"Obama needs to stop saying that "We're going to dig ourselves out of this hole" -- there are multiple ways to get out of a hole. Digging is not among them."

and Craig did NOT vote for McCain.
Posted by Wes Oleszewski at 1:04 PM 1 comment: