I'LL SIGN ANYTHING THAT'LL GET YOU OUTTA HERE QUICKER

One of the dark sides of aging into your 60s is that you begin to see many of your teachers and mentors pass away. It’s the price you pay for living long. This week I was deeply saddened to discover that someone who was a good example of one of the good guys, has left this life. His name is Dr. Tom Connolly and he was a star among the faculty at the Embry-Riddle Aeronautical university and someone that I looked up to through all the time that I was there. The best way for me to handle such things as his passing is to do the one thing that I am best at- write about it. 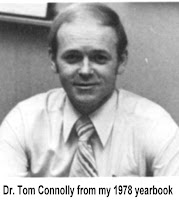 As most of you know I was in and out of ERAU for a full decade and saw Dr. Connolly rise from faculty member to administrator. Likewise, he was well aware of my struggle to work my way through the university. This episode takes place in my senior year. Along the way of climbing the mountain toward graduation, the “independent student” receives all sorts of shots. In my case they came from occasional vindictive jerks, or administrative bumps in the road, or self-induced speed bumps of stupidity, or just unexplainable funk adoodles (UFA)s- all of which have to simply be handled and left behind. This was a UFA that left me unable to register for flight without the signature of my faculty advisor. I only had two advanced flight courses to do and an aerodynamics class to make up in order to be completely done with my degree. The aerodynamics class was due to the fact that the previous trimester I’d had to miss the final because my oral surgeon in Michigan insisted that I fly back and be in his chair within 24 hours because of a rare infection of the bone the result having an impacted wisdom tooth removed while back home during Christmas break. I’d gone through all of the channels before I had to bug out and when I got back 14 days later, made up all of my exams but aerodynamics. The instructor, Bishop Blackwell, had taken a six month sabbatical in Mexico right after finals. So, I just had to take the “incomplete” and was set to make up the class in the spring. Now, however, I needed a signature to get into my next flight course. My faculty advisor was Bill Gruber, and he simply refused to give me the signature. The result was a polite, but somewhat peppery discussion where I actually avoided telling him to have that stick removed from his tight ass.

When I left his office, his student assistant, who was a friend of mine, gave me a quiet “psssst” and motioned to come near.

“He’s going on sabbatical for six weeks,” she whispered.

“When’s he leavin’?” I whispered back.

“Tom Connolly,” she replied with a whisper and a wink.

Nodding in approval I left. Instantly I knew one thing, Gruber was an Air Force vet. and Connolly was a Naval aviator… two different breeds, and one without a stick up his ass.

Thursday, I walked into Dr. Connolly’s office with my document that needed to be signed in hand. I didn’t even get a word out. He just nabbed the paper and signed it while saying,

“I’ll sign anything that’ll get you outta here sooner.”

He handed me back the paper and I walked over to the flight line and registered for FA-314 minutes later.

Six weeks later I was finishing the flight course when I got a message in my box to come and see Gruber immediately. So, that’s what I did. He was pissed,

“You went over my head, if you weren’t dang neared finished with that flight course I’d pull you out of it!” he snarled

“I didn’t go over your head Mr. Gruber,” I replied professionally, “I went around your flank. You departed and left your flank wide open.”

He told me to get out of his office.

Of course he and Dr. Connolly had discussed the whole thing long before Gruber called me into his office, I’d been around that place long enough to know that. And if Gruber could have pulled me, he would have. He just needed to vent toward me. I finished 314 and 315 and then easily passed the aerodynamics class to end my time at ERAU. Thereafter whenever I saw Dr. Connolly on campus I always smiled and shook his hand.

Whenever I saw Mr. Gruber, such as at the homecoming basketball game, I’d take the time to go up to him and quietly ask if his flank was open.

Posted by Wes Oleszewski at 5:25 PM No comments: 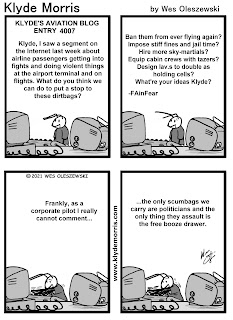 Posted by Wes Oleszewski at 9:11 AM No comments: