A DAY I WOULD NEVER REGRET 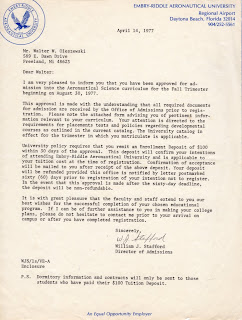 April 18th, 1977... exactly 40 years ago today, as of this writing... it was a day I'll NEVER regret. It was a spring Monday in mid-Michigan and it seemed as if winter had finally released its dark grip as the sun was out and the robins were singing. I headed off to another crappy day of work in my Highland Appliance company service van. My job was that of the now extinct TV and stereo repair man. I motored around the tri-cities, went into people's homes and fixed their new TVs and stereos that they'd just purchased, brought home and discovered that the damned things didn't work. That meant that I got to meet a lot of pissed off people. My boss was a total asshole who hated my guts almost as much as everyone at the store hated him. It was an insufferable situation that paid quite well as at the age of 19 I was making good money. This was the result of my attending a local career center in the 11th and 12th grades and taking both basic and later advanced courses in electronics. Now I had a job in electronics that I hated. Although I never had planned to remain in that job for more than a single year, I now could hardly stand it for a single week.

My routine was always the same; drive the van to the store, pick up my "calls" for the day, get nagged by the asshole boss, head out on the road and go into assorted homes to kneel behind TV sets while little kids in ketchup-stained pajamas tried to steal my tools. About the only solace that I had was the fact that my home town professional hockey team, the Saginaw Gears, were ripping their way through the playoffs and headed toward their first Turner Cup. So it was that I put my key into the van's ignition with it's Gears key-chain and headed off to every call and every TV.

After my day's suffering I returned home to Mom and Dad's house figuring to hunker down in my basement bedroom, draw some cartoons and call my girlfriend... just like every other day. As I walked into the house, my Mom pointed toward a large manila envelope on the kitchen table. It had arrived in that day's mail. It was addressed to me. It was from the Embry-Riddle Aeronautical University, "ERAU." I had applied to the university in the autumn of 1976 and was looking for an Air Force ROTC scholarship in Aeronautical Science... which is a fancy name for "pilot." The university, however, notified me that the Air Force was no longer doing Aero. Sci. scholarships and required all candidates to be in the engineering department. I wanted to do engineering about as bad as I wanted to keep working for Highland Appliance, so I decided to change my option, drop the ROTC and go in as a civilian in the flight department. That decision was made way back in February and I had been waiting since then to hear back from ERAU.

Oddly, I'd wanted to go to ERAU since the 8th grade. It was then that I was working in the counselor's office at Webber Jr. High School when a stack of assorted college fliers were mistakenly delivered to the Jr. high school rather than the high school. Looking at them I asked Mr. Barris, the counselor, what he wanted me to do with the stuff? He told me to just throw them away and as I went to toss them into the waste basket I saw that one pamphlet had an airplane on it. I kept that one and later studied it. It was a school that taught all about airplanes and, for the crazed space-buff that I was, the place was in Florida just north of "The Cape." Being anywhere near Cape Canaveral and the Kennedy Space Center was enough to fill my space-crazed imagination and learning to fly airplanes too was a sure winner in my book. This was the place for me and even though college seemed to be a lifetime into the future, THAT was where I wanted to go. When it finally came time for me to apply for college, ERAU was my first and ONLY choice. My high school guidance counselor tried to warn me off of that choice saying that he felt I didn't have the math background for it and perhaps I should go to the local community college instead. This was the same guy who, when I decided to take electronics at the career center in the 11th grade tried to warn me off of that too for the exact same reason. He said he thought I'd be better off taking sheet metal instead. I told him that I was going into electronics and if I wasn't carrying at least a "B" by Christmas, he could put me into sheet metal or even janitorial if he wanted. He just smirked and agreed. At the Christmas break I was carrying an "A" and he couldn't touch me. Out of the 16 of us who started Basic Electronics, only 3 of us made it to the advanced class for our senior year and only two of us graduated with a job in electronics. Now that same idiot was trying to warn me away from ERAU. The situation speaks for itself. Thus, on that Monday in April of 1977 I had an envelope from ERAU waiting at the table and countless implications waiting inside.

The envelope was fat, and squishy as if something was padded inside. As I held it the thought occurred to me that if this was an acceptance letter, opening it would likely change my whole life. I had no idea just how true that instinct actually was as I squished the envelope and stuck my finger in it to rip it open.

Inside that envelope was not only my letter of approval for admission to ERAU, but also a T-shirt with the ERAU crest. Unseen by me at the time the envelope also contained failures, struggles, frustration, poverty, discouragement, success, accomplishment, pride, glee, victory, new friends for life and a wife that I could never have imagined.

Suddenly I felt as if I was seated aboard a Saturn V moon rocket and the hold-down clamps had just released- I was on my way! Frankly, it's a good metaphor- because that thing had millions of parts that could fail and it launched to do the impossible. Now, I had to overcome countless problems, any one of which could lead to failure and I was setting out to do the impossible. "Impossible?" you may ask. Yes- think about it, I was a workin' class kid from the wrong side of the Saginaw River whose parents had both dropped out of high school (and so they both insisted that all three of their kids must finish school and go to college). I came from a place where the norm. was that you go to work in "the shop" or some other outlet that supported the auto industry. ERAU was, and still is, "the Harvard of the skies" (although it is my opinion that comparing ERAU to Harvard somehow degrades ERAU a bit), there was no way that I could afford to go there and I knew it. I was told over and over by the relatives and neighbors and assorted know-it-all blow hards "that's not for people like us," and NO ONE other than my cousin Tony believed I could do it.

I couldn't wait to get started.

I called into work the following day and just told them I wasn't going to be coming in. I took my bicycle for a long ride on the country roads of Michigan and just felt free. It was 79 degrees outside and the sun felt great. I got a money order for $100, which was the deposit fee that the university required and I mailed it gleefully off to Daytona. That evening I went with my Dad to the hockey game. Dad was the Zamboni driver and so we got there several hours before game time. He always let me go out and skate before he started doing the game ice. I took my stick, gloves and a half dozen pucks and hit the ice. It had been about a month since my final game playing in the juniors so it felt great to be back on the ice. I screamed around the rink, deep into the corners and blasting back out again firing shots. I had the whole of Wendler Arena all to myself and enough adrenaline pumping to bottle it and sell it in pharmacies. Under my ever-present hockey jacket I wore my new ERAU T-shirt. It was the only time that I wore it until I got my official letter of enrollment- I didn't wanna jinx myself. Dad was watching somewhat proud, yet probably deeply worried that I was setting myself up for a huge failure. He told me later that while I was out there one of the Gears players came through the arena's back door and stood watching. The professional hockey player mentioned that I was, "a real skater." Dad said something to the effect that it's too bad I didn't skate like that when I played and explained that I was blowing off steam because I'd just gotten into college. The player asked if I was "gonna play" there. Dad said no, I was going to Florida and gonna be a professional pilot. The player's comment was "Great!" I didn't even see the exchange- I was too busy ripping up the rink.

On April 25th, 1977, just one week after I'd gotten my approval letter, my admission letter from ERAU arrived. Four months and one day later, on August 26th, 1977 I said goodbye to my girlfriend Debbie, the state of Michigan, hockey and my life as it had been for the previous two decades and I headed off to ERAU. 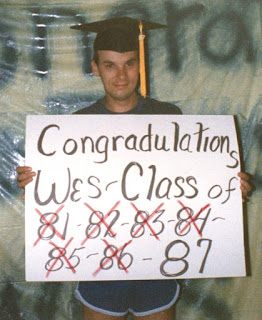 I'm not at all shy about saying that it it took me a full decade to work my way through that place- in fact I'm quite proud to say that. My goal from the start was not some seat in an airline cockpit... my goal, my focus, was simply and directly to finish- to do the impossible, to take every doubter, critic and smug tit feeder and show them that a kid from the wrong side of the river CAN do this. Along the way I gained so much beyond my degree that today, 40 years later, I feel like the richest man on Earth. I have no regrets- NONE, and I especially will never regret opening that envelope... 40 years ago today.


Posted by Wes Oleszewski at 10:07 AM No comments: