The question has often been asked, “Where did the Klyde Morris cartoon come from?” The answer is interesting.

In his youth, cartoonist Wes Oleszewski was a space-buff and model rocket enthusiast. At age 12, launching rockets with no one aboard seemed fairly pointless to Wes, after all, there had to be a crew otherwise what was the fun? With that in mind, the little 6th grader went out into his back yard and selected some common “cornfield ants” and routinely blasted their helpless little butts into the sky in balsa wood spaceships. Wes, being the strict non-conformist, never built his rockets according to the packaged instructions so every flight was some sort of contrived design that he had dreamed up. Violating every rule that the manufacturers could print, he tampered with engines and re-rigged recovery systems, the result being lots of spectacular disasters and lots of lost ant crews. In 1970, after a series of disastrous launches, Wes drew a few single-framed cartoons spoofing his wayward rockets. Unfortunately, these first cartoons have not survived the passing of years.

By early 1975, Wes again felt the urge to do some cartooning, and it was logical that his ants and their ant world that exists among, but un-noticed by the humans, would be the setting. Inspired by the old television series, “Voyage to the Bottom of the Sea”, Wes began work on “Forage to the Bottom of the Sea” which featured not only the ants, but Wes’ boyhood best friends Jim and Ken. 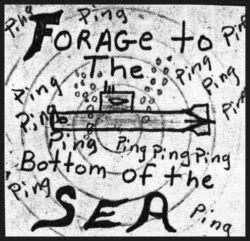