Should we do somethin'? 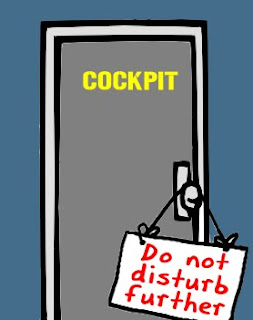 Recently, an overseas airline began profiling lone males on flights as all being potential child molesters. Yep, now there's a profile that I'm sure the current DHS can live with... yet it brings to mind a "There I was" story.

Back in the pre 9/11 days a crew that I was flying as a part of came in direct contact with a situation that fits this. It was one of those end-of-the-day flights as we were headed to our out-station from the hub. In the cockpit things were nice and quiet and boring... just the way airline pilots like them. The passengers were loaded, the paperwork was done and soon the cabin door was closed. I had ground on the horn and we were rolling away into the evening, as cool as can be. We were also on the back side of "the push" so most of the traffic had already departed- it was smooth goin' all the way to our runway. As we rolled across the field toward our runway, ground came on the radio and told me to contact Ops. before departure.

When I called Ops., to my surprise, the Chief Pilot answered. He told us that our flight attendant was under orders that if there as a single peep of any sort of a disturbance in the back, we were to call for ATC Priority Handling and turn immediately back. We asked what was going on, but he simply told us to ask the flight attendant. By then we were set to blast off and there was no time to call to the back until we were otta 10.

Of course nothing drives a flight crew like curiosity and we blasted up through 10,000 feet as fast as we could. I buzzed the back and asked the FA what was goin' on. He said that he did not think it was a big deal, but while the passengers were standing in line waiting to board, an adult male had made a "remark" to a young female who was flying as an unaccompanied minor. Whatever the remark was it frightened the little girl to the point that she reported it to the gate agent. The gate agents had arranged seating so that the idiot guy was seated all the way aft and the UM was seated forward, close to the flight attendant. We decided just to keep the seat belt sign on and that there would be no cabin service... just so we would have less of a chance of having to turn back. The captain made a BS-PA saying that ATC had reported the likely hood of some rough air ahead to cover for our actions. The captain then leaned over to me and thumbed toward the rear... "Lock the door" he said.

Now... Hollywood often portrays airline pilots as brave and heroic... and just like everything else that comes out of Hollywood- that's all bullcrap. In fact, if there were an airline pilot's pocket checklist for what to do when the excrement hits the turbine blades back in the cabin, it would say "Put out the sight that says DO WHAT YOU WANT WITH THE WOMAN AND CHILDREN, BUT LEAVE US ALONE and lock the door." So, of course we followed that procedure.

When I made the in-range call, our destination Ops. came back with a "What the hell's goin' on up there?!" To which we responded, "Why? What the hell's goin' on down there?" They told us that the place was full of cops and they had a guy at the gate acting like a wild man... he was the little girl's father. Apparently he had been contacted by the airline and told that some guy aboard our flight was trying to molest his daughter. He did exactly what I would do in the same situation... race to the airport like batman, burst through the doors, storm through security and try and beat the facts out of the totally uninformed gate agent. Of course the police were not far behind and were currently trying to cool him down. I reported back that all was very quiet aboard and the idiot remark guy as actually sound asleep, according to the flight attendant. Additionally, the little girl was and well protected from the scum of the earth, because the cockpit door was closed.

We taxied up to the gate and through the windows you could see some big, bristled guy surrounded by a half dozen cops. They deplaned the little girl first and she was escorted in by airport police and a gate agent, the other passengers followed and as soon as the last guy went in- all hell broke loose. From the cockpit all that we could see were arms, elbows, feet and fists. It was a lot like being a hockey player watching a brawl break out in the stands.

I murmured to the captain, as we watched, "Should we do... somethin'?" He gave me that are you f$%king nuts smirk and said, "Yeah... make sure that door stays locked and as soon as they're all gone out of that window, we'll go out and walk across the ramp to the other side of the building, go through Ops. and get in our cars and go home.

That's exactly what we did.
Posted by Wes Oleszewski at 3:38 PM