SpaceX: A New Chapter In Spaceflight- But Not The Whole Book

Although I am a big fan of SpaceX, I am a bit more reserved than many who have followed the COTS 2/3 mission.


Rather than saying that this is THE future of spaceflight, I'd rather think of it as a whole new chapter in the spaceflight story - a REALLY fun to watch and exciting chapter that reflects back to the grand old golden era of spaceflight with those all-liquid fueled boosters launching from Cape Canaveral, going into orbit and then splashing down to be recovered. 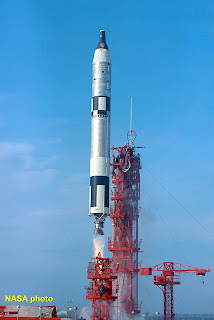 It's something that some of us who grew up with Mercury and Gemini and Apollo have always longed to sort of see "come back" in some form. With the Shuttle now gone, this makes a great chapter to "get into" and follow and cheer for. It's also the excitement of vehicle development. Personally, I cannot wait for the next step, the next glitch, the next fix and the next success; I love it!

Does the success of SpaceX mean that we should defund NASA and hand the whole basket of eggs over to "commercial space"… of course not. In large part, it is exactly that sort of de-developmental thinking that was the death-stroke for the Space Shuttle and has put America's human spaceflight program on life support. Rather, what is desperately needed at this moment is exactly what SpaceX is poised to offer; robust, reasonable cost, frequent access to the International Space Station. Thus far, SpaceX is on the doorstep of being able to provide that for cargo -- both going to the ISS and -- quite importantly -- from the station as well.

Critics of SpaceX and "commercial" spaceflight efforts may look at the recent COTS 2/3 mission's successes and scoff that what was accomplished only got as far as about 1965 on the spaceflight ruler. My reply would be, "and what's wrong with 1965?"

Gemini flights were lifting off from the Cape about every two months, there were great strides in spaceflight technology and new hardware was being flown, rung out and adapted for use on nearly a daily basis. With SpaceX and the other "commercial" participants, we are seeing the same basic trend. It is not just important, but critical, to keep in mind that every single time we fly anything in space we peacefully advance the technology of our civilization.

Frankly, I would be delighted to see SpaceX mirror 1965.

Let us also keep in mind what is currently planned is for the "commercial" side to take over the low earth orbit part of spaceflight while freeing up NASA to take on the task of advancing us beyond low earth orbit. I've heard some who smirk and claim that the success of SpaceX is going to lead to the cancellation of NASA's Space Launch System thereby leaving everything to "commercial." We should all hope that this scenario never comes to pass. Where NASA insanely overloads everything with masses of paperwork, private companies cut corners and wink at their own procedures and rules. And if you think it doesn't happen, sit down with any FAA inspector or NTSB investigator and have a serious talk. If you are dreaming of a pure commercial space program- be careful what you wish for, we just may get it.

Another mindset that I have often encountered is the one that seems to hold that SpaceX is now on an ultra fast-track to flying crews aboard Dragon. Indeed; the crew aboard the ISS reinforced this by stating that they would be comfortable inside the spacecraft.

It was a casual comment that many folks have latched on to. The fact is, that although SpaceX has made fantastic strides in the COTS program recently, they are still a good ways from actually flying a crew. A good yardstick for this is the requirement for launch abort capability. 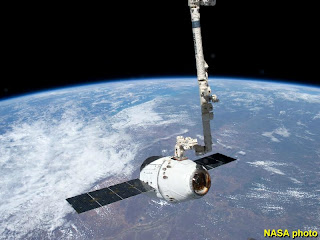 Although SpaceX has done some static firing of their proposed abort motor, the SuperDraco, the roadway to using it in an integrated system will require actual flight testing. If they intend to use it in an operational manned vehicle, in anything resembling the near future, they need to be flight testing that system now. Additionally, SpaceX states that they intend to use those motors as a recovery and landing device -- and that will require a great deal of testing. This is not to say that SpaceX cannot do it, it is simply a valid yardstick by which to measure the reality of operational hardware against corporate hyperbole. 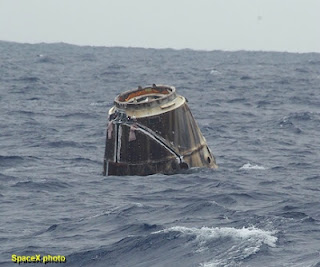 The bottom line is that, yes indeed, the events of the COTS 2/3 mission have made for an historic event.

Yes, SpaceX has accomplished a magnificent series of engineering and technical feats.

Yes, they have innovated a new way of doing many tasks in spaceflight and streamlined the process.

Yes, NASA should take many pages from their book.

And yes, this was indeed a great day in spaceflight. 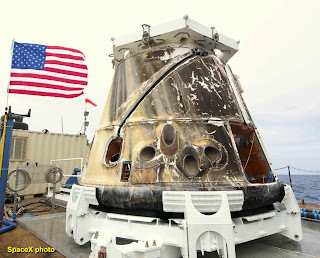 But, this historic event is not everything in spaceflight. SpaceX, although a terrific company, is not the do-all, be-all of spaceflight from now on. What we saw here was not the entire book -- it was simply a new and exciting chapter in the story. For those of you who choose to bathe in the SpaceX ideal, go right ahead - enjoy the moment, savor the success, cheer on the team; this is big stuff. For the rest of us, I would advise that we take in this chapter and look forward to what the amazing people at SpaceX have in store for us in the future. Yet, please do so with a healthy dose of reality - this is still spaceflight, and it is not easy, even when they make it look that way.
Posted by Wes Oleszewski at 6:40 PM