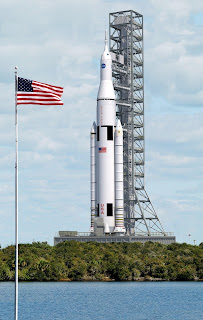 On October 11, 2010 President Obama signed The NASA Authorization Act of 2010. This placed into effect PL111-267 which is the law that mandated that NASA must do specific things by specific dates in order to bring to reality the government-owned launch system that is to be the next step beyond the shuttle. Of course you cannot have any NASA launch system without an acronym that becomes its moniker. In this case the Space Launch System has been dubbed the “SLS.” Although, by law, NASA was supposed to produce a complete plan for the SLS within 90 days of the law’s signing, that release did not come until September 14, 2011- some 339 days after the law was signed.

Birth of the SLS came in the wake of the Obama Administration’s FY2011 Budget Proposal. Within that proposal was placed the proposal for NASA’s budget and with that President Obama canceled the Constellation Program which was the replacement for the Space Shuttle that NASA had already spent a half dozen years and nearly $10 billion working to develop. Additionally, the Obama plan had no defined objective for NASA and no timetable to do anything other than wait for some undefined “Path breaking” and “Game Changing” technologies that were to come from someplace that was equally undefined. It also took all of United States manned spaceflight efforts and simply turned them over to a select few private, start-up companies that were selected for reasons unexplained. That portion of the overall FY2011 Budget Proposal sent shock waves through the aerospace community, through NASA, through NASA contractors and through the Congress where, by the way, Constellation had wide support on both sides of the aisle. This, however, meant nothing to the Obama Administration which had other ideas about NASA. Simply put, they sought to completely gut the Federal human spaceflight program and rebuild NASA as an academic think-tank in one swift stroke. Although that may have worked for Hugo down in Venezuela, it did not go over at all for Barack in the United States.


Within months of the Obama FY2011 budget proposal, the Congress had negated the administration’s “new” direction for NASA and composed a new space act which President Obama, grudgingly, signed into law. In that law the Congress directed NASA to come up with a launch vehicle that could loft 70 tons and later evolve into a vehicle that could loft 130 tons. In an effort to preserve the maximum amount of talent and skill in the spaceflight work force, the law-makers specified that work on the new launch vehicle must begin with a detailed design plan from NASA due 90 days after the law was signed and then press to begin physical construction immediately thereafter. The new vehicle was also to make the maximum use of Shuttle and Constellation hardware and facilities to the greatest extent possible in order to preserve the workforce. Under the influence of the White House, NASA finally delivered the SLS plan 249 days behind that imposed schedule.

Now that NASA’s politically appointed administrators have finally released to the public the details of the new vehicle, we can take a good look at the new launcher. Of course, the spaceflight community has known since 2010 what the SLS configuration will likely be. In fact the basic arrangement has been discussed by NASA engineers for several years. The basic arrangement uses a Space Shuttle external tank as the “core” of the vehicle with two Shuttle derived SRBs attached in a manner similar to that of the Shuttle itself. The difference being that the SRBs each have five segments instead of the four segments used on the Shuttle. Additionally, the core tank has a thrust structure built onto its base and attached there will be either three or five Space Shuttle Main Engines (SSME). Atop the tank will be placed a second stage that will be powered by a J-2X engine derived from the Saturn rockets that were used in the Apollo program. That stage will be used for boosting cargo or for boosting the Orion Multi Purpose Crew Vehicle (MPCV) into missions beyond Earth Orbit (BEO). In early test flights that second stage may be substituted with a Delta IV “kicker” upper stage that can be used to boost the Orion. This overall configuration allows for the launching of crews and the safety of a Launch Abort System (LAS), or escape tower, to cover all phases of boost.

In operation the SLS will lift off by first igniting the SSMEs, followed several seconds later by the SRBs in a manner similar to the Shuttle. The primary difference will be that the five SSMEs will develop a combined thrust of ~2 million pounds while the five segment SRBs will each develop ~3.6 million pounds of thrust giving the vehicle a total thrust at liftoff of ~9.2 million pounds. That is 1.5 million pounds more thrust than the Saturn V moon rocket’s maximum liftoff thrust of 7.7 million pounds and just a bit short of the Soviet N1 rocket which reportedly produced ~10 million pounds of thrust. That will, however, make the SLS the most powerful rocket ever launched by the United States.

At staging the two SRBs will drop away as they have done with the Space Shuttle, however, these new five segment SRBs will have burned significantly longer than the Shuttle SRBs and will stage at a far higher altitude. The decision as to if or not the new SRBs will be recovered for reuse has still not been announced by NASA. (Update, 2013: the SRBs will not be recovered)

After SRB jettison, the core stage will continue to fire to near orbital velocity. At the end of its burn it and its formerly reusable SSMEs will burn up on reentry. In case you are wondering why they are throwing away the “reusable” SSME’s, there is a good reason. It was found that the “cost savings of reusability” attached to the SSMEs turned out to be a myth. Each and every time that an SSME was returned from a Shuttle flight, it was removed from the orbiter, disassembled, inspected, reassembled and reinstalled into the orbiter. The overhead cost it doing that turned out to be more than the cost of building a new, disposable version of the same engine. Although this inspection standard was required to maintain the high degree of safety involved in the Space Shuttle program, it more than negated any cost savings in the concept of “reusability.” Thus, the early SLS vehicles will use up the stock of reusable SSMEs (also known as RS-25D engines) and then transition into a semi-new and disposable version of the SSME, (the RS-25E) all of which will discarded in the launch process. In doing so the SLS program can actually operate with less overhead than the Shuttle.
Ground Support Equipment (GSE) for the SLS will make use of hardware left over from the Constellation program that was canceled by the Obama Administration, as well as facilities from the Shuttle program that was ended by the Bush Administration, plus facilities and equipment left over from the Apollo program that was canceled by the Nixon administration with the help of the Johnson administration. Thus, the facilities of Launch Complex 39 plus the VAB and Launch Control Center will all be pressed into service.

One of the Constellation contracts that was able to be completed before the Obama administration decided we did not need to go to the moon again because, as the President so snidely put it “Buzz (Aldrin) has already been there” was a mobile launcher. This launch platform and umbilical tower also known as an LUT is similar to those that rolled to the pad with the Saturn V. The difference, however, is that this LUT is made to be ultra light weight. The Apollo LUTs were constructed of steel “I” beams and built without weight considerations being a major limiting factor. This could be done because the Saturn V itself, when rolled to the pad, un-fueled, on its LUT weighed just over 502,000 pounds. The LUT itself weighed in at 10.6 million pounds. The result was that the crawler was designed to carry over 17 million pounds of load, including its own weight. A fully stacked Constellation heavy launch vehicle would weigh nearly five times more than the un-fueled Saturn V because the twin SRBs are always “loaded” and each weighs more than 1.4 million pounds. Thus, a new lightweight LUT had to be designed and constructed. Intended for the Ares I, that LUT was fully erected when President Obama canceled Constellation. Some in the media referred to it as “That B.W.M.: big waste of money” but the fact is that the LUT is simply a skeleton and has no vehicle specific workings installed- thus it can be adapted to another vehicle. Enter the SLS and what will be a new use for the Constellation LUT.

So, at this moment in time the SLS is ready and able to move ahead. And after having signed into law a launch system that he does not want, President Obama has used every tactic his administration can imagine to delay and block the actual production of the SLS vehicle and the implementation of the law that created it. The President’s Office of Management and Budget (OMB) has refused to request funds for the vehicle, NASA’s politically appointed administrators have foot-dragged reports and plans required by the Congress while OMB required a protracted “independent” survey of the costs involved. When that survey did not show the inflated costs that the administration wanted to see, the report was tossed into a tar pit of the NASA Administrator’s office. Finally, information was “leaked” to the Wall Street Journal and the Orlando Sentinel stating that the SLS was found to cost about twice as much as planned and the White House had “sticker shock.” For Senators Kay Bailey Hutchison and Bill Nelson, that was the last straw. They finally marched into the offices where the delay tactics were originating and applied the needed pressure to get the program made public and get the SLS moving. Exactly what the pressure was and where it was applied is unknown, but the fact is that on September 14, 2011 the United States Congress may have, at least for the moment, rescued NASA’s human spaceflight program from strangulation by the Obama administration.

Posted by Wes Oleszewski at 1:39 PM