It's one of his six book-series on spaceflight!

On December 8th, 2010 the second Falcon 9 rocket ever to fly boosted the first Orbital Dragon spacecraft from Cape Canaveral’s Launch Complex 40. I was there to watch it fly. That spacecraft completed a two orbit test flight for Space Exploration Technologies, also known as SpaceX. Following splashdown and recovery of the Dragon, SpaceX founder and chief designer Elon Musk proudly displayed the cargo that had been flown aboard the Dragon; a top secret wheel of cheese. At the time it was implied that the cheese was the only thing aboard the Dragon, but there was something more aboard the spacecraft as it flew into orbit that day.

Aboard the first Dragon spacecraft was not only the cheese, but also a nine inch tall, plush Klyde Morris doll.

That fact, however, was not for public release at the time. It was a BIG secret.
How did Klyde get aboard the C1 Dragon you may ask? Well here’s the story…

Originally the Klyde doll was not supposed to fly. I sent it to my friend Brian Mosdell, who at that time was the director of operations for SpaceX at Cape Canaveral. Brian and I went to college together at Embry-Riddle and we both served on the Avion newspaper together. He was the sports editor and I was the cartoonist. In the summer of 2010, after the first Falcon 9 launch Brian and I were a part of a radio talk show panel and we got talking about Klyde. Brian said if I sent him a doll he would mount it in the flame trench and focus a high-speed camera on it for the next launch. I thought that would be fun, so I sent him the doll.

But that’s not what happened.

On November 1st of that same year Brian sent me an e-mail asking me to write the most favorable SpaceX cartoon that I could. He said that he wanted to fly Klyde aboard the orbital Dragon and was going use the cartoon to help convince the powers that be to let him do that. I did the cartoon... 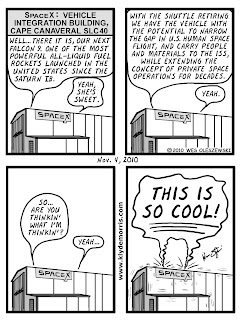 On November 17, 2010 I received an e-mail under Brian's SpaceX e-letterhead indicating that both  Gwynne Shotwell "our president" and "Elon" approved- and Klyde flew into orbit in December.

So, why was this a secret?

Permission to fly the Klyde doll was granted by Gwynne Shotwell, the president of the company, but only on the condition that we would keep it to ourselves. You see, SpaceX had a score of sub-contractors as well as NASA folks who all wanted to have an artifact on that first flight and they were all turned down. The company felt that if it got out that Brian’s doll had been aboard it may upset their sub.s, or worse yet, NASA.

I wasn’t exactly ordered to “tell no one.” In fact I told Aero-News. net and some of my friends in the hardcore space press such as Robert Pearlman from collectSPACE dot com before I knew it was supposed to be a “secret-secret.” Then, after the flight, Brian said I could tell family and a few "friends." I said, “How about Miles O’Brien, he’s my friend?” Brian just groaned and said, “Give me a break.”

Gwynne Shotwell had, however, approved a Klyde SpaceX astronaut dream sequence cartoon idea for after the flight... 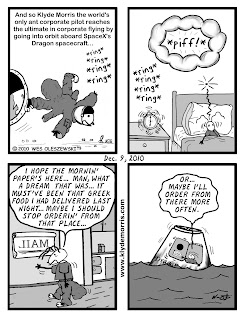 So, you may ask again, why are you going public now?

Well, Brian is no longer with SpaceX and so I asked if I could put the story out and he said that he now had no problem with that.

If you are wondering what happened to the Klyde doll that orbited the earth on that historic mission- the answer is again quite simple...

Brian told me that the doll is very safe, it sits on his wife’s desk at work.

Posted by Wes Oleszewski at 9:27 PM