A Little Secret About the ERAU Flight Team 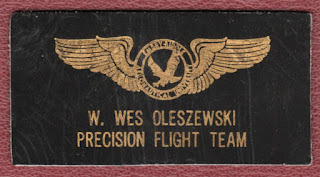 Early in the fall of 84 I was, where I always seemed to be found, hanging out in the Avion office, when two AHPs, Mitch Williams and Nick Fasano, came in talking about re-starting the Flight Team. Sitting there just listening I could tell that these guys had zero knowing about National Inter-collegenet Flying Association, or "NIFA" events, but they had tons of motivation. President Hunt, who loathed the team and NIFA, had passed away the previous year. We had often debated over the existence of an ERAU flight team- I wanted it to be more than a club and he wanted it to be gone. I never won any debate with President Hunt- especially that one. I'd been on the flight team since 1978 when we were called "the flight team club." Now he was gone so I figured “why not?” I began to explain to Mitch and Nick how each event went and my relationship to the old team.

Bang, I was back in the DAB Flight Team- which now had exactly
three members; Mitch, Nick and me.


The team grew, but struggled to be competitive. Pilots had to pay for their aircraft use and travel as well as hotels and food. Yet, still we pressed ahead under Mitch's leadership and Nick's management skills- which were quite cunning.

Early in the fall trimester of 1985 I was elected to be the team's Chief Pilot and replacing Mitch who had become an ERAU flight instructor and a team coach. One afternoon, about a week before the 1985 NIFA Regional Flight Meet, I got a call to come to University Provost Eric Doten’s office and bring the team’s assistant Chief Pilot, Dan Ferrichello, with me. 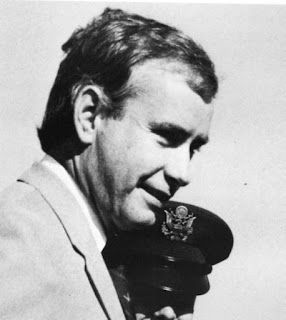 We arrived on time and Doten asked us into his office. He sat down and reclined at his desk and said,

“President Tallman wants to wish your team the very best of good luck in the upcoming Regionals.”

Dan and I looked at each other and I said,

“Tell the President we said thanks.”

Then Doten pointed at the door and said,

Dan dutifully went over and closed the door. It’s funny, but I remember this like it was yesterday, but years later when I asked Dan he hardly remembered the meeting at all. Anyhow, Doten said,

“President Tallman wants to fully back and fund the Flight Team. That’s aircraft, practice time, uniforms, hotels- everything. There is just one catch, he can’t get that all past the Board of Trustees unless you guys succeed. You must get into the Nationals, otherwise no deal. This whole thing must also remain a close secret, if one whiff of this gets out, the deal is off. So, you must get into the Nationals this year and no one outside of this room can know about this deal until after Tallman announces it after he gets it past the Board. That’s the deal.”
After leaving Doten’s office Dan and I walked over to UC and stood on that little balcony that then overlooked the campus. Standing there I looked at Dan and I swear he had turned pale- looked like he was about to spew. I asked him what was wrong and he said,

I just looked across the campus smirked and said,
“Shit, we own this fuckin’ place.”

I was that confident in our team. 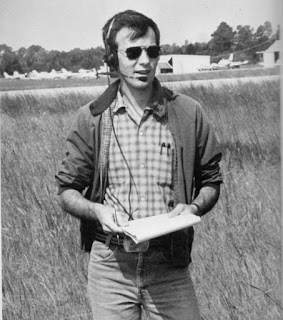 As Chief Pilot, and a former hockey player, I knew the value of having a “deep bench” and I decided to restructure the team in that manner. In a deep bench your first line can play just as good as your third line and you spread the talent out so you are covered fully in any situation. So we went heavy on ground events and greatly expanded the overall team that fall. I also looked for pilots who could fly the air events just as well in the Cessna 172 as in the 150. That way if something happened and we could not use ERAU’s aircraft, we could rent 150s and still be competitive. I even went so far as assigning a team member to call FBOs near Murfreesboro, TN, where the Regionals would take place, and get prices and aircraft availability; just in case. If we got hung up without our school’s aircraft, the odds were good that we would have to rent and 150s would be what could get. We were working hard and things were looking good as the date for the Regionals approached.

On the eve of our departure for the Regional meet we had two ERAU stretch vans leaving to drive up to MTSU and two of our coaches were to follow in two ERAU chickenhawks. We also had tropical storm Kate coming up the Gulf of Mexico. As we were boarding the vans, I got called up to Director of Flight Ops. Paul McDuffee’s office. He told me and the coaches that he would not release the school’s aircraft for our use due to the storm. The storm itself was of no real threat, but McDuffee was being overly cautious.

I told our coaches that no one should tell the team until the next morning when we were at MTSU. That way, instead of it being a giant bummer for them to stew on all the way to MTSU, it would be seen more as an urgent problem for us to overcome. 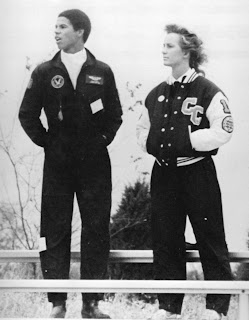 It worked- everyone pitched in when they got the news and soon I had four guys out renting and getting checked out in Cessna 150s. We juggled the pilots in the flight events and went hard on the ground events. I had two guys who could not seem to make friends with the 172 for landing events, but could put a 150 down in your backyard, switching places with my two
chickenhawk aces, both of whom had never flown a 150. Meanwhile our ground people were just super. 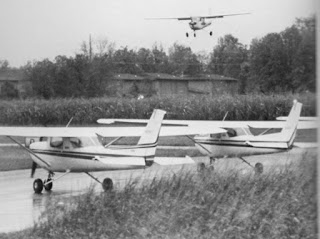 Our guys doing the best they could with what we managed to rent.

We finished the meet having done beyond our best considering McDuffee's bogus decision. That night at the banquet a rumor was started by the MTSU team that since there were fewer teams than usual (as I recall it was something like 4 or 5) then only first place and second place would go to the Nationals. When the scores were announced, we got 3rd. After the banquet the Auburn team captain shook my hand and said,

“See ya’ at the Nationals.”

“We were told that third doesn’t get to go,” I replied.

“Bullshit!" he half shouted, "Third goes! Go ask the guy from NIFA.”

I asked and he said,

Of course by then, most of my team was back at the hotel and somewhat dejected. So I got the whole damned bunch into one hotel room and told them that we were in the Nationals! I’ll never forget walking from that room to go across the parking lot to a 7-11 to get a slurpie and hearing the sound of that celebration behind me. They had done one hell of a job. To this day I am really proud of those folks and what they did for our university. There were a lot of outstanding individuals on that team.

As soon as I got back to campus I gave Doten a full briefing. He agreed with me that McDuffee was acting like an old lady by not giving us our aircraft. The storm turned and died and we could easily have had our own aircraft. Still, it had been McDuffee’s call yet the Flight Team had gotten the result that General Tallman wanted anyhow. The next day Mr. VanBibber, (aka "Mr. Van," a veteran Vietnam F-4 pilot, who was our Flight Team faculty advisor) and I had a "how'd it go" meeting with McDuffee. Of course, me being the one student on campus with zero fear of administrators laid it on the line in that meeting. I told Mr. McDuffee that he had deliberately put my pilots at risk by forcing us to fly rented aircraft. Our ERAU aircraft were kept to the highest standards of maintenance in the general aviation world and my pilots had gained a high degree of skill and confidence in them, but because of his decision not to allow us the promised university airframes, we ended up flying aircraft that we had no idea how they had been maintained, and that such was not the environment that our university was about, especially when it came to the best pilots on campus.

I thought Mr. Van was gonna crawl up the back of his chair! He began to try and talk me back out of what I had just said, tellin' me that that's not really what I meant to say. I simply said that if I hadn't meant it, I wouldn't have said it. McDuffee knew me too well and just ducked and let it pass. What Mr. Van didn't know, is what I knew. The fix was in, and McDuffee could not do anything to derail the flight team- we had earned a place under General Tallman's wing, and we were safe.

About three weeks later I was in Mr. Van’s turbine engines class and after class he said he needed to see me in his office “Most ricky-ticky.” Once there he told me that he’d talked to Doten and gave me the “big news” that the university was now sponsoring us. I did my best to act surprised, but Mr. Van only bought that for about a heartbeat. He said,

“You shit, you knew that all along didn’t ya’?” 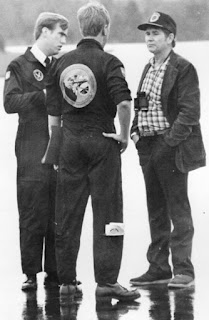 I told him about the meeting with Doten and that we were ordered to keep it a secret. He just shook his head, pointed at me and said,

"In spite of McDuffee," I quipped.

We had a good laugh and at that evening’s team meeting I told the gang. They were stunned and in total disbelief until Mr. Van told ‘em that it was true. Everyone, except Dan and I, remained stunned for a long time; but at least we could finally talk about it.

In the years ahead Mr. McDuffee and I always got along and he worked his way up the administrative ladder at the university and did so many good things for the students and school that it makes that moment when we butted heads (among a few others) to be little more than a trivial footnote. In 1998 I flew a Falcon 20 into DAB and took my boss over to see the campus. He got to meet Mr. McDuffee who pointed to his own head and then to me and said,

"See these gray hairs? They're mostly from him!"

Today the Daytona ERAU flight team is exactly what we all wished it to become.
Posted by Wes Oleszewski at 10:12 PM