Always have a good jumpseat story to tell. 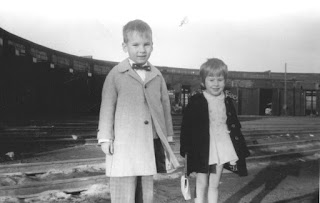 Railroad engineer's kids, my sister and I Easter Sunday 1962... at the roundhouse in Saginaw, of course. Showing off our Sunday best for Dad... who was working that day.

I come from a railroad family- that’s why I talk loud. When you grow up in a railroad family, if you wanna be heard you gotta be loud. From the time I was born my dad was an engineer on the C&O railroad. For an engineers' kid, climbing up on an engine is simply no big deal... like going to dad's office. Been doin' it since I could walk. When I was little, often on the fourth of July, after the fireworks, I’d “got to work” with dad. He worked a half shift that night and I’d ride in the “fireman’s seat” aboard the engine as dad switched railroad cars in and around the Saginaw yard or the auto plants in Flint. On “payday” I’d get a C&O check for a half day’s work. It wasn’t cashable, but I never knew the difference. Dad would take it into the drug store and come out with some cash for me… seven whole dollars! I was a rich nine-year-old! It was a lesson in how you get money. You go to work and you get paid. 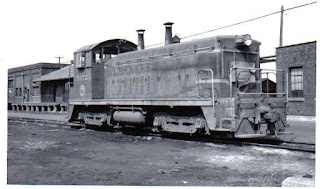 Photo from the Buck Wyndham collection (airline pilot and foamer)

For someone in aviation, going to the airport is also nothing special- it’s just a part of going to work. Same thing as going to the railroad yard for a kid who grew up in a railroad family- it’s no big deal. Goin’ to pick up dad or to fetch his paycheck while he catches some sleep. Yet, there are other similarities you may not consider. One day as I was jumpseating home to BWI and as we  taxied out for takeoff at MSP I noticed a crowd of people gathered outside the boundary fence at the end of the runway.

“Lots of foamers out there today,” I quipped.

“Foamers?” the captain squinted, “what’s that?”

“Those folks there at the end of the runway with the cameras,” I replied

After we blasted off and got into cruise the captain asked me to explain “foamers.” I told him that my dad was a railroad engineer and that was the term they used to describe the train-buffs who stand by the tracks and photograph and film the trains as they go by. The crews said that those guys foamed at the mouth when they saw a train coming.

Suddenly the cockpit conversation turned to trains as both pilots confessed to being friggin’ foamers. I told them that I had a story that they’d like.  Now…for people reading this who are not those of us who have spent endless hours in a cockpit at cruise, you should know that interesting cockpit conversation is of GREAT value- because the hardest thing to do in the cockpit is stay awake. Thus, I let go with my story and had a fully captive audience.

When I graduated from Embry-Riddle Aeronautical University in 1988 having finished all of my commercial and multi engine instrument pilot's ratings, I headed back to Michigan to stay at mom and dad’s house while I worked as a survey pilot for the DNR. Before I ever got that job and nearly as soon as I got into the house my dad casually says "Yer' goin' to work with me tomorrow."

Okay... been doin' that since I was a kid too- so, what the heck. I figured he wanted to show me, his newly minted commercial pilot son, off to the crew in the shanty. The next day mom made us both a couple of lunches and we headed off to the yard at Midland’s Dow Chemical plant. Dad had been working the Dow job for the past few years. He was WAY high on the seniority list of CSX (which was the company formed when the C&O was swallowed up) and could pretty much pick whatever job he wanted and hold it. He picked the Dow day job because it was just a few minutes’ drive from our house and he could pass the Dow security clearance for handling HAZMAT in the plant. Once he had that Dow badge he really could not be bumped.  We got to the yard and dad introduced me to the guys on his crew then he tells me I'm gonna run the engine from Dow to Farwell, Michigan!

"If you can fly an airplane commercially, you can run an engine," he reasoned.

Dad only had to show me the basics. I already knew where the throttle and the brake handle was located, how to see if the flashers were working by looking at the hole in the side and how to run the “notches.” I knew about the deadman’s peddle and so on. He did need to instruct me on the alert system that would go off if the engineer had not taken some sort of action after so many minutes. First an amber light would flash, and compared to aircraft “caution lights” in the cockpit, this was a big light. If you didn’t respond by making some action- tooting the whistle, adding some brake, cycling the deadman’s peddle or a half dozen other things that could be moved, the light would glow steady and then after so many seconds it would apply the brakes, stop the engine and begin blowing the whistle. He also coached me on how far from a crossing I needed to begin my whistle blow; timing is everything. Lastly both he and his conductor told me very clearly that if anything happened, we hit a car, a person or the train went “on the ground” I was to leave the engine and walk far away… like I was never there. Oh yeah, this was an unauthorized trip for me.

I got the "N" scale engine for Dad one Christmas... it turned out he had 8210 in his logbook! That's his UTU button that I keep pinned on it today.

Dad worked the engine inside the Dow plant as we only had a few cars to shove. Then we pulled  a few and switched to the line headed for Farwell. Now it was my turn to drive. I guess any of you foamers out there reading this would have been fully puckered and near orgasm, but frankly, I was right at home. It was like the first time I flew a Falcon 10, I’d been around it so much that it was a comfortable place. Besides… it’s a train… it can only go where the tracks go. On we went to Farwell and as we approached one section of track my dad told me to smile. Pointing down he showed me four foamers standing there taking our picture. I smiled and waved. Approaching our destination, which was actually a siding just northwest of the town of Clare, I got us stopped, with some coaching, where we needed to be and dad along with his crew of one switchman and a conductor parked the cars we had and picked up one to go back. Then I ran the train into Midland and, again with some coaching, got her stopped where we needed to stop. Once more the real railroad men took over and soon our day was done. I asked dad why they called it the Farwell job when it only went to Clare? He said it originally went all the way to Farwell, so they just call it that.

Today that line that I ran back in 1988, all the way from Midland to Clare, is a paved bike path! Yet nearly every time I told this story from the jumpseat I found at least one of the pilots to be fascinated by it. Dad told me that I could tell everyone that before I ever exercised my commercial pilot's certificate, I ran a locomotive. You'd never guess how many airline pilots are totally envious of that. 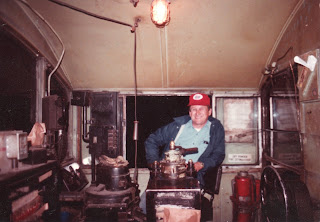 My dad passed away in December of 2004 and although most people in the Saginaw, Michigan area remember him as the Zamboni driver for the local professional hockey team, the ice was his art, but running a locomotive was his career. When he worked the “road job” from Midland to Port Huron the line ran just 800 feet behind our house and you could always tell it was him by the whistle blow. His was two long, one short and one extra long. If you were listening on the radio you could tell it was him because all of the other engineers were called by their job number “2346” or “5418” or such… but they called my dad “Irish.” 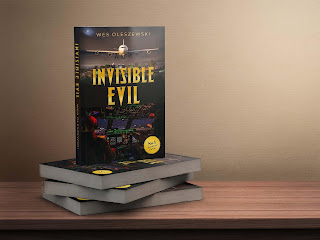