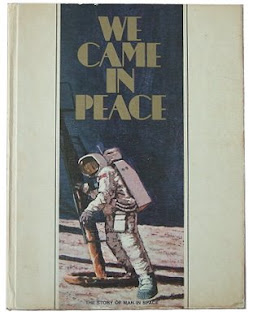 "Stable 2" was the proper description for the Apollo 11 CM shortly after it jettisoned its parachutes and was left bobbing in the blue pacific. It was a moment when the vast majority of Americans were left satisfied at their nation's accomplishment and ambled back into their everyday lives with Apollo being a pleasant, but low priority memory. A sliver of the population carried disgust from the event as they felt all along that it "wasn't worth it." Some of us, although unable to fully evaluate it at the moment, had just had the seeds of inspiration that would alter our lives watered by the splash of that blue water.

The seeds of my spaceflight inspiration were actually planted long before Apollo 11. In fact, the circumstances that led me in the spaceflight direction began even before early Gemini missions- these circumstanced, however, began of a troubling note. I was in the second grade in the fall of 1964 when my parents were called in to meet with my teacher and were given some stunning news... "Wes can't read." My stunned parents were informed by my teacher that I was unable to read aloud, those captivating adventures of Dick and Jane and their fascinating dog Spot. My folks were told that they had to take me downtown to the Board of Education building to meet with a "Reading Specialist." In 1964, such a visit to such a person was a real embarrassment- something to be done quietly and in the shadows- because it meant your kid was defective.

Thus my parents meekly took their defective son downtown. We entered the big, dark, building with its echoing hallways and met the lady who was "The Specialist." She was very nice and led us to a doorway that opened to a big room. She directed me to go inside and wait while she had a few words with my parents. The room had living room styled furniture and was filled... FILLED... with books. The books were seemingly tossed around everyplace and were of all sorts of subjects. There was also one, almost unnoticeable feature in that room- a very large mirror on one wall. I walked around for about 90 seconds and then found a book on the Boeing 707. I sat down with it and started reading. Behind the mirror was the amazingly savvy "specialist" and my worried parents- watching my every move. "See..." she told my folks, "he can read- he's just bored with Dick and Jane." She also informed them that the book I had was on the 6th grade level. My mom asked about my teacher's concern that I could not read aloud. In the following discussion my folks were informed of the difference between "Can't" and "Won't" (interestingly, I'm currently working on my 14th book for publication... and I still do not read aloud to the public... ever.) My folks were given marching orders to get me anything... ANYTHING... to read that I was interested in- comic books, Mad Magazine, science books, sports books... anything that I was interested in. Mom and especially dad were then spring loaded to respond to what sparked interest in me. Some of the material that my folks fed to me included spaceflight and I had shown interest in that subject. Later- along came Apollo 11 and my folks knew they'd hit the jackpot.

Several weeks after the splashdown, my dad stopped into a Gulf station for gas again. Once again, he came back from paying and he handed me something. This time it was far better than that infernal paper LEM kit, this was... a book. When I opened that book- titled "We Came In Peace" it was as if someone had thrown LH2 into the sparks of my new found spaceflight passion. Even looking at the publication today, it is likely one of the finest illustrated and composed presentations of the nuts and bolts of the effort to get to the moon that has ever been produced. I lived in that book to the point where my 6th grade teacher told me never to bring it to school again... today I own two copies.

Thanks to Project Apollo, and Apollo 11 specifically, my parents found the key to the one thing that would alter the path on which their son would travel for the rest of his life. Along that path other sparks of inspiration would show their effects, but the foundation would be firmly constructed in that summer of 1969. I'm sure there are others who say the same thing, and who have stories similar to mine. NASA, on the other hand, saw their decline begin at that same moment. Caught in the bluster of ill political winds, NASA had its single weakness exploited- NASA did not have tooting their own horn in their job description.

Spaceflight is as much about Inspiration as it is about Exploration. I was inspired by Apollo- inspired to the point where, in a social strata where the norm was that you grew up, maybe you graduated from High School, you went to work in the "shop," you got married and your kids did the same... I directed my life toward technology and toward a technical education. There's nothing wrong with workin' in the shop, or in industrial related jobs- hell, my dad was 37 years on the railroad and I was always proud of him. That said- Apollo showed me a different direction, and instilled an attitude in me that I could do anything, especially when people told me that I could not. Inspiration is the greatest benefit of human spaceflight. When people quack about the "cost" they need to be asked what value does changing a kid's life for the better have?

As the Apollo 11 CM bobbed in the pacific and its crew huddled behind the window of the MQF while Nixon stood outside pretending to be enthused yet all the while actually planning to cancel the entire Apollo program, I was busy creating. Using a common matchbox, some balsa wood odds and ends and a jar of Testor's silver paint, I was making my own little MQF. When it was finished I went out onto the patio and caught three medium sized ants. Naming them Armstrong, Aldrin, and Collins I locked their little helpless butts into quarantine- just like the Apollo 11 astronauts... minus the aircraft carrier and Nixon... of course. It was a good way for a 12 year old to mimic what held my imagination at that moment. The next morning I opened my matchbox MQF and found all three ant-stronauts stone cold dead. "Gee..." I thought to myself, "I hope the real astronauts do better."
Posted by Wes Oleszewski at 1:00 AM