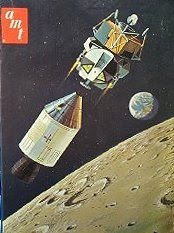 By TEI and Apollo 11's subsequent cruise back toward earth, preparations had already started for their arrival back on earth and isolation to ensure that they would not spread any moon germs around. Oddly, they had a already spread a fever around the planet- a spaceflight fever. As I said before, it was as if the most of the population had caught spaceflight fever- yet it was a malady that would last only a short time for most folks- only a few of us would have it for life.In my neighborhood signs of idiotic apathy were already starting to show. One of the neighbor ladies sputtered that she didn't see "...why they're doing that anyways." Of course she was also a person who believed completely that the street lights were turned on every evening and off every morning by "One guy in an office down at city hall." and she was serious about that. Thus her views about Project Apollo are put into context. Still, the seeds of cancellation of any space project are best sewn in cow manure by morons- so it was that Project Apollo's early demise took root.

What this person and her ilk had to say meant little to me- I was starving for more Apollo, more space, more NASA! I even took another stab at trying to put together that blasted paper LEM model. Again I was thwarted and ended up leaving it on my bedroom floor. In the months ahead it would be moved to my closet floor where it would sit and mock me for several years.
My dad, however, came to my rescue. Dad always worked nights and dad always worked days- lord knows when the man ever slept. Back in 1969 he was working midnights as a railroad engineer and days as an auto mechanic at the Montgomery Wards Auto Center. Following the Apollo 11 lunar landing, dad came back from work and handed me a box containing a 1:200 AMT Apollo Spacecraft model- the kind with the LEM legs permanently in the stowed position. It fit in the palm of your hand and was easy to build- indeed it was way easier than the paper LEM. I had it built and was playing with it by bedtime.

Later, dad made a deal with the guys who ran the toy department at Wards (yes- in those days department stores actually had people dedicated to specific departments), that became a windfall for me. You see, plastic models tend to not sell if the factory seal is broken- buyers are generally savvy enough to equate that broken seal with missing parts. And if parts actually are missing, there's no way the kit will sell and it is normally just marked off and tossed in the trash. My dad made a deal with the guy in the toy department, where the models were sold, that before throwing away a space model, they could sell it to him for next to nothing. They checked it with the store manager, and he said it was okay. In the atmosphere of spaceflight fever, there was plenty of pressure on the space models section of the toy department as people tore up the shelves on a daily basis. Before long dad was bringing home from work all sorts of models. Often parts were missing, but I could not care less. I was building and learning fast. Soon, that paper LEM was no longer on my build list... but it still mocked me.
Posted by Wes Oleszewski at 10:27 AM