A big ol' plate of NASA to cancel 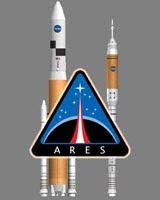 There are so many aspects and dynamics going on right now in the world of the DC vote grubs that no one knows what will be next, or in the future for anything. Frankly I think we'll be lucky if they don't change the flag to green with a red hammer and sickle and then have Obama come on the TV and declare himself president for life- because most of the media would simply go along with that. In reality, the party in power is rapidly ripping itself to shreds while the other party is trying to figure out where all of that ripping noise is coming from. Into all of that, the Augustine commission is about to slide, in front of the most liberal left wing President in American history, a great big platter of NASA all garnished with "Nothing fits any budget" sprinkled all over it... YUM! Sitting there with his knife in one fist, his fork in another and his red hammer and sickle bib covering his nice suit what will the President do with such morsel?
Take a wild freakin' guess. Go ahead- all of you space coast workers who voted for him after his shoot and scoot campaign stop at KSC and all of you aerospace workers who voted for him because the union said you should, and all of you NASA workers who had senator's Bill and Babs present him to ya'... come on... guess!
Anyone think that after quadrupling the national debt in just six months and taking heat for running the fiscal boat of the United States full speed onto the rocks, the President may just take this opportunity to fulfill one of his most chanted campaign slogans and make a "change?"
The media is already on board- as it was said today in the Orlando Slant-enal it is now up to the President "...to decide whether human space exploration is a worthy priority or an unaffordable luxury." OH BOY!... it is a left-wing liberal's dream come true! How better to take the last thing that the USA actually leads in- spaceflight- and gut it, thus bringing us closer to the liberal's goal of finally making us a third world nation!
And even if President Obama does not decide to gut and castrate NASA- there is the congress. The Health Care socialization movement is so damaging the Democrats that they could lose more than 80 seats across both houses next year. That means that some bedrock NASA supporters may be out, and those who replace them will not be in the mode of increasing budgets of any agency. It is going to be cut, reduce and repeal in an attempt to pull back from the insane spending of our current one-party government.
So- the entire balance of United States human spaceflight now will be cast into the bee hive of indecision and CYA politics that is Washington DC. What will the President do? Lead? or vote "Present?" Perhaps he'll send us on a grand adventure to discover... EARTH! Ya' know- chase the left's global warming myth at the rate of a few billion bucks a year until he's thrown out of office. What will the headless chickens in the congress do? And even more important- what will the next batch of vote grubs who replace the current herd of wafflers do? Will they vote to allow our great garden of technology wilt on the vine- like they did four dechades ago? We can only watch.
Oddly, some at NASA are actually delighted at the prospect that project Constellation may be cancelled- because they feel it has been raiding money from the agency which will somehow find its way back to whatever they are personally working on. I fear they have a shock coming. In that embarrassingly inaccurate movie "The Right Stuff" there was a line that went "No bucks- no Buck Rogers." Of course the writers of that script, along with getting almost every other fact wrong, also got that quip wrong- the way it really works is No Buck Rogers- No Bucks. Without human spaceflight, NASA will fade into the federal background. Be careful what you wish for people- those who wished for the death of the Ares I, those who wished for the cancellation of Constellation, those who wished for an end to the shuttle program, those who wish for the end of the ISS, those who chanted for "Change" and those who wish for the end of NASA itself- you may all get what you want, and all at the same time.
Posted by Wes Oleszewski at 1:10 PM