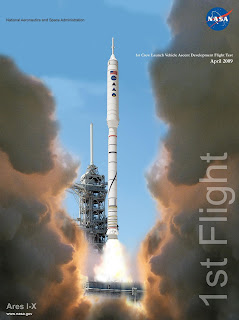 It seems to be that almost every spaceflight site on the Internet loves to publish that NASA's next launch vehicle, the Ares I, is in "trouble." That is... every place except where actual Ares I hardware technicians engineers exist.

Is the Ares I in trouble? Currently- the answer is "yes" only on the keyboards where the ineffectual arm-chair self-proclaimed spaceflight experts exist. You see the fact is that the Ares I launch vehicle is only troubled in cyber space. You see, cyber space is the playground where the children who actually hate... yes... HATE this launch vehicle, romp. They seem to get their little rocks off by generating all sorts of factual sounding, yet hollow expressions of the vehicle's short falls. Yet when one tries to pin them down by asking them to show you actual numbers or to provide documented, first-hand proof of what they claim, these arm-chair critics quickly scurry down the foggy path to Internet obscurity. You see, it is far more easy to post cyber venom as if scrolling on the wall of a stall in a public restroom than it is to actually build and launch a new vehicle. I like to refer to these ineffectual arm-chair self-proclaimed spaceflight experts simply as "Stall-wallers."

The problem is, that too often these stall-wall cyber critics are seen as actually having true credibility. Let us take a moment and look at that credibility. The first sign that you are reading the rants of a stall-waller is to look at where you are reading the rant. If it is on some "forum" someplace, look first at the poster's number of posts to date. If that total is four figures or more, and the person is not the site owner or a moderator- it should be a dead give away that you have a stall-waller. Ask yourself this, who has the time to sit and post on one or more forums that many times? Think about it- do the math, or let the forum do it for you and look at the poster's posts per day. What sort of a person, other than the one who actually runs the forum, has that kind of time? Certainly not someone who is involved in engineering launch vehicles for a living, nor someone who is managing a complex flight program. Instead you have some arm-chair dweeb who is using the Internet to make themselves look and feel important. The next test to see if you have a stall-waller is to simply ask for complete numbers, sources and documents to support their rant. When you get, instead, a wide ranging and foggy re-write of their original junk, ask again. Soon will follow the personal attack on you and the "well who are you to ask ME this?" retort. Stall-waller! Another great method for uncovering the stall-wallers is to watch for their "key" words and terms. The use of the term "Kool aid drinker" or any form there of, is a dead give away. Repeated use of "...my sources tell me..." is another term that is a dead give away. Additionally people who talk in all knowing terms, yet later ask dumb questions that should be solved by common knowledge is another give away. Lastly, watch for Herding- because these jerks like to run in packs and often need cover from others wearing the same style tin foil hats and thus will come to one another's rescue with the same unsubstantiated dribble.

That said- the rubber hit the runway this week in the halls of Congress when the Augustine Commission met with the people who actually will have genuine influence as to where the future of the United States space program will be. Apparently, those people in Congress haven't spent any time hanging out on Internet space forums... because their attitude toward the Ares I, and I-X was polar opposite of what the stall-wallers would have you believe.

It was a "cold shower" day for the Ares I haters.

It seems- as I've said all along- that the Ares I is only really "In trouble" on the Internet. The members of Congress were speaking largely in favor of Constellation and the Ares I. They seemed ready to reinstate the $3Billion dollars annually that was cut from the NASA budget and would make the Program of Record (Constellation) work again. They spoke, not in terms of Gap reduction, but in terms of gap elimination. It has been stated as fact by the stall-wallers that the Ares I has all sorts of "Show-stopper" technical issues- Augustine testified that his commission "...found none of this." Additionally, the stall-wallers have argued that the "sunk costs" of $8billion already spent on the Ares I did not matter at all when it comes to decision to cancel their hated vehicle and switching to one of their pet boosters (pick one- there are several). Yet the weight of sunk costs was a very big factor in the hearings.

I mentioned the fact that the Ares I and I-X were in trouble, was simply a figment of cyber space- while I was on one of the comment sections of NASAwatch a few months ago. The site's owner- who is normally level headed except when it comes to Mike Griffin or, apparently, the Ares I- told me to go and post that stuff on my own blog, because HIS "sources inside the Augustine Commission" had told him that the the Ares I was in deep, deep trouble in the commission. Gee... I just watched 2 days of hearings, and saw no indication what-so-ever that the Ares I was in "deep trouble." In fact I saw just the opposite. Augustine himself said today that there would have to be a very compelling reason to cancel the vehicle and right now there was none. Additionally, when asked about the I-X he stated flatly, "I think we should launch it." Gosh... his remarks do not sound to me like someone who has sat on a commission where a launch vehicle was in "deep, deep trouble." Apparently, all of the doom sayers exist only here in cyber space and not on the Augustine commission or in the halls of Congress... just like I said on NASAwatch.
Posted by Wes Oleszewski at 7:25 PM