All because of that dumb little ant 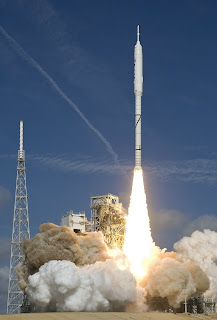 As I stood in the dark at the KSC Press Site and gazed out at the Ares I-X, in the distance, poised on Pad 39B, bathed in crossed spotlights, and then looked behind me to see the big observation building marked "CBS" and "NBC" as well as the satellite dished broadcast trucks, one thought haunted me...

How does someone who grew up as a rabid spacebuff witnessing spaceflight history only through the living room TV as it was broadcast from those same buildings end up here? How is it that the person who was the weirdest kid on his block and used to stuff ants into balsa spacecraft and launch their helpless butts atop model rockets end up here, now, a first hand observer of spaceflight history? Certainly it is not by way of formal journalistic training- because I have none. Surely it is not because of my career as a professional aviator, because there are lots of them out there- and none of them are here with me. And definitely it is not because I have any skill or technical training that NASA could use in this event- because I absolutely have nothing in that portfolio.

Additionally, I'm far from being a veteran space reporter. In fact, when I attended the roll-out of the Ares I-X a week earlier, I got my badge and lanyard and I asked the lady when the buses were going to take us out to the press site. "What buses?" she replied looking a bit puzzled. After I explained that I'd not been to the press site since I was on my college newspaper, the lady snickered and told me that all I had to do was to put on that badge and drive to the gate, show the guard the badge and then drive my car to the press site. Drive my car into KSC!?! Ooooookay. As the guard waved me through the gate and I headed toward the VAB, I began to giggle out loud... Suddenly I was 15 years old again.... "This is soooooo cool." Most teenage boys have fantasies about naked girls and winning the big game, space buffs, however, have fantasies about driving into KSC. Thus I was living out one of my wildest dreams (besides, I'd experienced the naked girls in my college days- so what's left? I don't think that winning "the big game" is in the cards for me). Of course this dream come true was tempered by the thought of accidentaly making the wrong turn and getting machine gunned by the KSC Security SWAT Team.

So how is it that a slob like me, gets to be here?

The short answer is, of course, that I wrote some articles on the Ares I-X for the Aero-News Network and because of them I asked to be credentialed for the roll-out and the launch. Yet, the short answer is not good enough- if I looked a bit deeper into my life I found that a common thread runs through a lot of the cool stuff I've done. It is all because of that dumb little ant that I draw.

From the time that the Klyde Morris cartoon began appearing in the Embry-Riddle Aeronautical University's Avion newspaper, my entire path in life has been altered by that simple bit of artwork. I went from being the generic freshman that no one noticed to the person that every frat. wanted to pledge and every person throwing aparty tossed an invitation to- all in just one trimester. I was lucky enough to realize very early on that it was not me that was popular, it was not me that they wanted to hang out with- it was the cartoon character.

Way back in 1982 my dad suggested that I should consider being a cartoonist who can fly rather than a pilot who draws cartoons- but I thought flying would be more fun. Dad was actually right- it just took 3 airlines, one corporate gig and 3 furloughs for me to figure that out. I'm amazed that the popularity of that little cartoon ant is a sort of "E ticket" to all sorts of things from free trips to airshows, to witnessing stuff like X-Prize and the Ares I-X. Likewise, I'm also amazed when stuff like that comes along and I stand there feeling very much like a 15 year old again, grinning and saying to myself "Not bad for the weirdest kid on Lexington Dr." and it is all because of that little cartoon ant.
Posted by Wes Oleszewski at 12:26 PM