Ares I-X... an arrow pointing toward the future 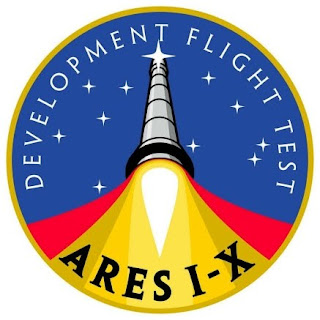 As the Ares I-X lifted majestically from Pad 39B, it became the world's largest eraser. What it effectively erased were all of the outlandish claims made by the nutcake Ares I haters that have been splashed all over the Internet.

Some of the more outlandish claims were that the Ares I-X would hit the Fixed Service Structure on liftoff, or that it would become uncontrolled and cartwheel, or that it would buckle in half and explode, or that it would have to be destroyed by Range Safety shortly after liftoff and would cause heavy damage to to the space shuttle sitting on Pad 39A. It did none of that. Perhaps the most tasteless came from the paranoid camp of the "Direct"proponents when one of their lead guys claimed, shortly after roll out, that he'd "heard" that officers at the Range Safety Office were refusing to sign off on the vehicle so the launch would not go. Considering that these "Direct" guys already made fools of themselves in front of the Augustine commission by stating that dark forces within NASA were somehow out to get them- this new claim, posted without sourcing, put them solidly into the tinfoil hat/alien abduction crowd. All of these claims were argued on the Internet with near religious vigor and far beyond the point of sensibility.

On October 28, 2009 at 11:30 a.m. the Ares I-X lifted off of the pad and in just over 2 minutes, it erased the soapbox upon which all of the Ares I haters were standing and shouting their nonsense. The flight has been successful and the Ares I haters are left attempting to rebuild their snowfort of nonsense.

Like an arrow pointing toward the future, the Ares I-X demonstrated that the vehicle configuration is completely sound. It did not hit the tower, it did not cartwheel out of control, it did not fold in half and explode, it did not damage the nearby space shuttle and very obviously- the range safety officers did indeed sign off on the launch.

People who were sucked in to the nonsense presented by the fanatical Ares I haters should learn a lesson from this mission. Be careful what you read and believe that has come from the Internet. Think for yourself and use hard engineering facts instead of buying into hysterics.
Posted by Wes Oleszewski at 10:59 AM