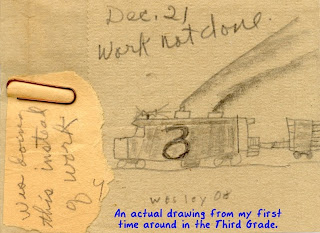 My daughter just go her first report card- ALL good grades... she takes after her mom.

In grade school, my own report cards were always a jumble of assorted good grades intermixed with a healthy garnish of below average and unsatisfactory marks. Keep in mind that this was the 1960s and teachers were not inclined to care about how any sort of grade may scar a kid's ego. My parents always focused on the "citizenship" grade- If I kept that one up in the good range, the rest did not really matter. Of course there was always that one place in the report card where your teacher got to write-in a comment at the end of the year... mine must have troubled my folks a bit...

Grade K: "Wes is very nice to everyone and has only had one disciplinary event- That was when we were pretending to have the room set up like an airliner. The girls took turns playing stewardess boys took turns wearing the ear-muffs and playing the pilots. Wes was very upset when the game ended and he had not gotten to be the pilot and wear the ear-muffs. I explained to him that not everyone can be an airline pilot. I mean- it is not as if that incident would effect his whole life- what are the odds that he'll grow up to be an airline pilot?

First Grade: Not only does Wes not make good use of his time in class, but he is in a constant state of daydream. His presence in the class could easily be substituted with a common paperclip.

Second Grade: Wes cannot read aloud. I strongly suggest he be taken to the reading specialist and find out why he cannot read. (BTW- I did indeed go the the "reading specialist" who explained to my folks the difference between "Can't read aloud" and "Won't read aloud" as well as my being bored to death with "Dick and Jane" and "see spot run." Today I'm the author of 14, make that 15, books, and I still refuse to read ANYTHING aloud in public. It's a choice, not a disability.)

Third Grade (the first time): Wes never completes an assignment. He is continually drawing and doodling in class- in some cases has even drawn uncomplimentary images of me. He must repeat the third grade. (Insert maniacal laughter)

Third Grade (the second time) I have often considered moving the blackboard to a position outside the classroom window- that way perhaps Wes may actually spend some time looking at it.

Fourth Grade: There is an observation tower and a high powered rifle in Wes' future- I'm just not sure which end of the scope he will be on.

Fifth Grade: When I first learned that Wes had been selected as Captain of the school safety patrol I said to myself "My God! They've given him a badge! And now he's in charge!"

Sixth Grade: Wes cannot read. He also knows far too much about project Apollo than he should. He leads the class astray with unending NASA analogies. We have a classroom, we are not NASA- please try and make this clear to him before he enters Junior High School next fall.
Posted by Wes Oleszewski at 6:17 PM