Where are those Internet forum space experts now? 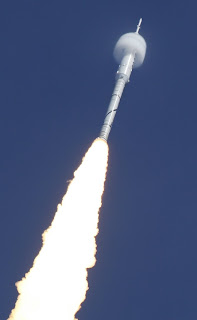 It has been HIGHLY amusing watching the Ares I haters after the launch. The silence has been quite loud. A few of them have tried the "re-contact" route, but that was rapidly shot down. There were some "yeah but" butts out there doing the "Yeah but, the 5 segment SRB will burn differently and may still TO" but no one is listening anymore.

The fact is that there are a lot of self-proclaimed "experts" out there as well as a crowd of their faithful followers who are now standing around with a lot of egg on their faces. NOT ONE of the critic's predicted horrors appeared- in fact, not even a hint of ANY of the predicted faults actually existed.

All of those cyber blow-hards with their blackberry-generated quips, their posts with tag lines saying things such as "Cancel the shaft now" or "Kill the stick" and so on have not had a lot to say- the screaming has gotten very quite and the arm waving has degenerated into a shrug or two. Even those "Kill the stick" sort of sub-tags have either vanished from forum posts or have been changed in many cases.

And so, the lesson here is that most of those critics who spoke the loudest, waved their arms the hardest and had the most toxic stuff to say about the Ares I-X did not really know what they were talking about- they only knew how to make it sound good and thus make themselves feel really important. Now, I'm sorry to say- their thrill is gone. But hey- perhaps the I-X Prime may come along and they can once again play in the mud puddle that is their own ego. They'll be back- trust me.
Posted by Wes Oleszewski at 10:10 AM