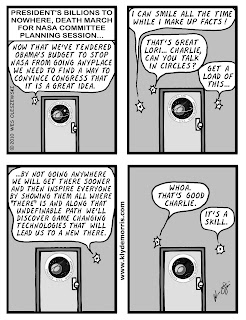 Oh what an amazing stew NASA Administrator Charlie Bolden is making for himself as he rushes to to sell, at all costs, the new Obama NASA budget. Charlie will, it seems, do anything to serve lord Obama. No matter how toxic the paint, he will paint himself into a nice tight corner and then fall upon the brush as if it were a sword just to please the grand Obama.
Get out there Charlie and serve the American people a giant crap sandwich by telling everyone it is peanut butter. Charlie knows that the FY2011 Obama budget is a poison pill for NASA and that will lead to the slow death of something that has held America's greatest pride for 50 years. He knows too that this will spell the end of United States astronauts flying in space, let alone flying beyond low earth orbit- but what the hell, Charlie has already had his rides, so screw the rest of the Americans who may want to fly in space- let 'em ride Soyuz... right?
As I write this, Charlie, Lori and a hand full of other Obama idolizers are busy composing circle talk that they can spout in front of Congress that will make the Obama vacuum in United States human space flight seem like a new and exciting adventure. Charlie's good at circle talking too- he uses the term "there" as if it were a grand new place to which all of us can someday sail thanks to the great Obama. Never mind that he offers no actual definition as to where or what "there" is, or that, under the Obama budget to nowhere we will not have any hardware to get us to "there" for 15 years or longer- nope, just make it sound like a grand adventure Charlie and then Obama will be pleased.
And what of that Congress? Well to listen to and watch Charlie and Lori and their little demolition crew, you'd never know that the Congress has the final say- in fact, you'd think that the Congress has no say what-so-ever in the matter. Obama decreed that NASA's human spaceflight program is finished and Charlie says "Thy will be done." With any luck, Charlie will be in for a rude awakening.
What if... what if... the Congress elects to order the Space Shuttle program extended to cover the gap, the Constellation program reinstated and the Ares I developed in full. What will Charlie do then? You see one of the corners that Charlie has painted himself into is the Shuttle- which Charlie has said, in public, to KSC workers, flying it is like "playing Russian roulette." If the Congress, who actually DOES have the final say instead of Obama, and orders the Shuttle to continue flying, Charlie, who has compared that operation to playing a suicide game will have to oversee putting crews on additional shuttle missions. The word "squirm" comes to mind.
Of course if Charlie does not like his situation he could do the honorable thing and resign his post- but that would leave the amazingly ill-suited Lori Garver, how cannot think her way out of a spaceflight paperbag, in charge of NASA. That would really make Charlie's idol and leader, The Obama, look bad... and we can't have that, can we Charlie.
All in all Charlie has been given quite an amazing toxic stew to serve to the American people. He gets to lead the effort to dismantle a 50 year program of historic success to which hundreds of thousands of Americans have dedicated their lives to and more than a score have actually given their lives for. Demolishing American pride is Obama's on-going quest and right now his chief mechanic is Charlie Bolden. But what does Charlie care... as I said, he had his rides, so to hell with everyone else, Obama is all that matters to Charlie.
Posted by Wes Oleszewski at 5:44 PM