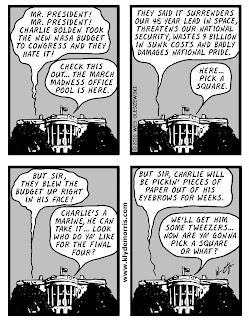 It is quite clear that the architects of this radical direction that the Obama administration intends to send NASA on are actually making it up as they go along. That is one hell of a way to run the United States space agency. Their appearances in front of the Congress in an attempt to justify this gutting of NASA is a stab in the back to every person who has dedicated their lives to NASA and the efforts of that agency that has given great pride to this nation. The Obama budget and those who have had their hands in its authorship are a disgrace. Charlie got exactly what he deserved- he was ill-prepared, lacking in his ability to communicate, unable to recover from mistakes and easily confused. He failed this checkride.
Posted by Wes Oleszewski at 10:05 AM