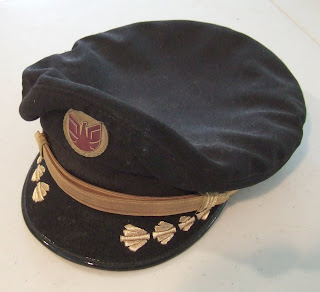 When you are working your way up to a pilot's career, it is almost impossible to not daydream about having the uniform... especially, the hat. When you finally get there you often find that the airline usually makes you go and buy the uniform. But it comes with a nice, new- perfectly shaped hat with a sparkling brim and a dazzling hat badge. Inside is a styrofoam doughnut to keep the hat in its perfect circle shape. You look in the mirror and say to yourself "Oh yeah"

A few months on the line is all it takes before the hat becomes a pain in the ass. It gives you hat hair, it gets forgotten and has to be recovered, it blows off, it gets sat on and soon you don't want to wear it at all, so you begin to carry it. That's even a bigger pain in the ass. Finally you realize that the best way to carry the damned thing is right up on the top of your head. Then you learn that there are far larger pains in the ass at any airline than the hat... besides, it really impresses little kids- so what the heck. Next you find uses for the hat. Mine was always handy for holding a list of all of the door codes I needed to know as well as other assorted other numbers. Need a number- tip yer' hat... how easy. It's also good for sleeping when you're dead-heading. Pull it down over your eyes and the world, and passengers go away. After a while, the hat gets pretty beat up and that's when it is the best. That styrofoam doughnut is long gone having been pulled out and thrown away the first week you had to wear the thing and you can't even feel the hat on your head anymore.

That all leads me to a story told to me one day in ops. when we were all weathered in. One of the new pilots was poking fun of my well-worn hat saying I looked like a B-17 pilot from World War II when another guy piped up and began to tell us about his first day with his hat. He'd just gotten home from training and his girlfriend, whose dad was a long time airline pilot, called. She asked him to come over and said "Dad says he wants to see you in your uniform." So he gleefully put on his brand new uniform and drove to her house. Once in the living room he modeled for the family- the dad seemed to approve, then said... "There's just one thing wrong..." he reached over and removed the newbee's hat. "...it's this hat." With that the senior airline pilot ripped out the styrofoam doughnut from the hat and ripped the doughnut apart. Then he put the hat on the floor and started stomping on it. Next he started kicking the hat all around the living room and finally out the front door. Then he kicked it around the yard, through the flower bed, into the bushes and stomped it into the yard mulch- all in front of the newbee's horrified eyes. Then the senior pilot picked the hat up, flexed it as to rip it apart, brushed it off and placed it back on the newbee's head. "There..." he said, "...now it looks like an airline pilot's hat."

Today I'm a long way from my airline days but my beat-up hat still serves a use... my kids just love to wear it.
Posted by Wes Oleszewski at 9:09 AM