Something I just couldn't hold 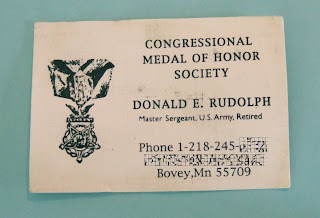 You never know who you're gonna meet while deadheading from one place to another. It was a normally gloomy Minnesota autumn day when I squeezed grudgingly aboard one of Northwest Airlink's Junkstream 31s on my way from Hibbing to "Minnie." I'd have climbed aboard a flying terd to get my ass out of Hibbing that day, so a seat aboard a Junkstream worked for me. Seated next to me was a gaunt old fellow with a friendly face and manner.

When people are seated next to a uniformed pilot they seem to automatically want to strike up a conversation. The man seated next to me asked where I was going? I replied that I was headed home and had managed to escape before crew scheduling could find me in Hibbing. He smiled and I asked him where he was headed. He said he was heading to a Medal of Honor reunion in the Philippines. I asked if he was a Congressional Medal of Honor awardee and he told me that he was. I thanked him for my liberty, but also knew enough to not ask what he had done to earn the award.

For a moment I looked at it and then was suddenly overcome by the feeling that I could not hold it in my hand. I did not deserve to posses it for even a second- it's meaning was so huge and the lives of so many true heroes were behind it that it simply overpowered me. In haste I handed it back and mumbled something like "I really don't deserve to hold that." The man actually understood that. He smiled knowingly as he tucked it back into his shirt pocket.

We talked about his route of flight as we headed for Minnie. He told me that Northwest Airlines gave Medal of Honor awardees free seats on their way to events such as his reunion and we talked about what a long trip it was. In what seemed like only minutes we were rolling up to the gate and getting ready to deplane. The man reached into his jacket and gave me his card "Donald E. Rudolph" was his name. I said goodbye as he left and I stayed behind... so I could stick my head into the cockpit and tell the crew "Hey, you guys'll never believe who sat next to me!"

When I got home I paid a visit to the Nimitz Library at the Naval Academy and looked up Mr. Rudolph. His official awardee record is attached here. Mr. Rudolph passed away at age 85 on May 25, 2006- just four days before Memorial Day.

As Memorial Day 2010 comes and goes it is important to consider the true heroes in our society. Too often we Americans elevate sports figures, TV personalities, musical stars and even politicians with slick public relations wizards to the undeserved status of "Hero." Yet walking among us every day are those who actually had to fight for our liberty and gone past are millions who died for our liberty. I've been lucky to meet a number of those brave people and hope to meet many more- all of whom I believe should have a medal of honor. I just hope none of them ever hands me one again.

Rank and organization: Second Lieutenant, U.S. Army, Company E, 20th Infantry, 6th Infantry Division. Place and date: Munoz, Luzon, Philippine Islands, 5 February 1945. Entered service at: Minneapolis, Minn. Birth: South Haven, Minn. G.O. No.: 77, 10 September 1945. Citation: 2d Lt. Rudolph (then T/Sgt.) was acting as platoon leader at Munoz, Luzon, Philippine Islands. While administering first aid on the battlefield, he observed enemy fire issuing from a nearby culvert. Crawling to the culvert with rifle and grenades, he killed 3 of the enemy concealed there. He then worked his way across open terrain toward a line of enemy pillboxes which had immobilized his company. Nearing the first pillbox, he hurled a grenade through its embrasure and charged the position. With his bare hands he tore away the wood and tin covering, then dropped a grenade through the opening, killing the enemy gunners and destroying their machinegun. Ordering several riflemen to cover his further advance, 2d Lt. Rudolph seized a pick mattock and made his way to the second pillbox. Piercing its top with the mattock, he dropped a grenade through the hole, fired several rounds from his rifle into it and smothered any surviving enemy by sealing the hole and the embrasure with earth. In quick succession he attacked and neutralized 6 more pillboxes. Later, when his platoon was attacked by an enemy tank, he advanced under covering fire, climbed to the top of the tank and dropped a white phosphorus grenade through the turret, destroying the crew. Through his outstanding heroism, superb courage, and leadership, and complete disregard for his own safety, 2d Lt. Rudolph cleared a path for an advance which culminated in one of the most decisive victories of the Philippine campaign.
Posted by Wes Oleszewski at 1:07 PM