The day the first Klyde appeared

February 14th, 1978, the day that the first Klyde Morris cartoon appeared in the Avion newspaper at Embry-Riddle. It was a day that I remember quite clearly. I had gotten the go-ahead to submit the cartoon the previous Thursday and now, less than a week later it was coming out in print. This was Avion day on campus and the papers were set out at assorted locations at about noon. For the rest of the afternoon everyone had an Avion and was intently reading it. Klyde would be on page 2, the Editorial Page and located in the bottom left corner, so when people opened the paper, there it would be. There were no other cartoons done by students in the Avion at that time- especially on page 2.

As a second term freshman I rode to campus that day on the rickety powder blue bus that transported us from the over-flow housing at the Royal Scottish Inn (the “RSI” in Riddle speak), which was anything but “Royal” to the main campus. ERAU had expanded enrollment that year and effectively doubled the student population from 2,500 to 5,000 the previous fall. Some 50% of which had dropped out by Thanksgiving and less than 15% of us returned for the spring term. So, the university brought in another few thousand and kept the population at around 5,000. To say there were growing pains would be more than an understatement. Classrooms were packed, dorms were filled, extra sections of courses were created on the fly and registration was a nightmare. Students began dropping out as soon as classes started. Many had come to ERAU for quite the wrong reason, such as the beach, parties (that were beyond rare), girls (which were even more rare- I think they numbered about a dozen when I started) and the “fun of flying” (at ERAU, flying is a profession- it’s serious- it ain’t just for fun). One guy who was in the RSI with me never attended classes, only flew a little bit and used most of his time spending his dad’s money customizing his van in the RSI’s parking lot. At the end of our freshman year, he got in it and simply drove away, never to be seen again. Thus ERAU was ripe for some cartoon satire and I just happened to have been born with the cynic/satire gene… now, it would be in print.

As each of us stepped off of the bus at the University Center (“UC” in ERAU speak) we each nabbed an Avion out of the rack. I opened mine on the spot and there was my cartoon. It didn’t look too bad either- considering that it had been drawn in ballpoint pen. Stuffing it into my book pouch I trotted off to the GRW complex and my NAV 1 class. I sat in the back and watched as the other guys came in, sat down and opened their Avions.

The guy in front of me looked at the front page, opened to the second page, scanned it, flipped to the Fraternity page! Nothin’! Not a laugh or a giggle… nothin’.

Another guy opened his and simply went right to the sports page!

The next person went right past too!

Again and again and again everyone either went right past my cartoon or had zero reaction! I’d expected a laugh or two or perhaps even a snicker, but there was just nothin’!

After class I shuffled around the UC to see if anyone there may have a sense of humor, but it all looked the same. Apparently no one thought much of a dumb cartoon drawn by an oddball freshman. On the bus ride back to the RSI people were reading the Avion, yet again no one said anything about my cartoon. I took a little comfort that at least no one was making fun of it. Later that day it began to rain one of those depressing Florida February rains… how fitting. Riding the bus back to campus for dinner that evening I pondered whether it was worth doing another cartoon. It may be better to save myself the embarrassment. One of the sayings in the ERAU flight department was, “death before embarrassment.” As we arrived at the UC and the bus door opened I made my way down the steps. There, sitting soaked in the gutter was an Avion, turned with my cartoon face-up. The guy ahead of me stepped on it!

Of course the folks at the Avion wanted more cartoons and insisted that they were “great” although I thought that the staff was just trying to make me feel better. What I did not know, and I would not figure out until the following autumn term, was that in places where I was not around, the cartoon was actually an instant hit- especially with the university staff and faculty. Of greatest importance, and again unknown to me was it was a hit with the Dean of Student Affairs Jeff Ledewitz and it was a major hit with University President Jack Hunt. In fact, shortly after the first cartoons I got a message in my box saying that Dr. Ledewitz wanted to “speak to me.” Then I got word that President Hunt was “Looking for me.” I was terrified! Here I was the son of two parents who had never finished high school, going to a prestigious university and I thought I was going to get kicked out because of a cartoon that drew! My folks would surely kill me.

For the better part of two weeks I dodged Ledewitz until one day his secretary came up to the Avion office with a copy of my ID with my picture and looking around the office spotted me. “You!” she said pointing to me- the most pail one in the room, “Dr. Ledewitz wants to see you, come on with me.” As it turned out he simply wanted to compliment me and say that he loved the strip. A couple of decades later he told me, “I expected to meet this wild and crazy guy, but you were really quiet and humble.” I explained that it was because I thought he was gonna expel me!

In or meeting, I did not say much and as I was leaving, Ledewitz said, “Oh, by the way, President Hunt is looking for you.” Oh GREAT, so the axe is gonna come from the top I thought. Fortunately, I did not see much of President Hunt for the rest of that term. We all knew that Jack Hunt knew EVERY student on our campus either by name, face, reputation, or all of the above- so there was no place to hide. One day, just before final exams I was coming down the stairs in the UC leaving the Avion office and across the dining room on the far right side, through the doors comes President Hunt! Holy shit! I got to the bottom and ducked around the corner into the hall pinning myself up against the wall as if escaping an assassin. After a few moments I peeked around the corner and Hunt was apparently gone. Gathering my wits I strolled toward the cafeteria entrance just beyond the pillars. As I walked past the last pillar something grabbed my left arm, “GOTCH!” President Hunt said jerking me around… he had been lurking behind the pillar in wait of me. Anyone who knows me well will tell you that I am not difficult to surprise- I am damned near impossible to surprise, but Hunt got me for sure. If it wasn’t for the fact that I was trying to live on one meal a day and had not eaten that day I’d have shit my pants. Of course President Hunt simply wanted to tell me how much he loved my cartoon strip and then he invited me to stop into his office anytime to just sit and talk about anything, “You’ll find that my door is always open to you.” he said. Some 30 years later, Dean Rockett would inform me that I was one of only TWO students to which President Hunt ever afforded that privilege. Rockett would not tell me who the other student was.

Of course I took President Hunt at his word and often rode my bicycle to the administration building and simply walked in to sit and talk. His secretary would just wave me on it. In one of those conversations, President Hunt really made it clear what my position was in his eyes and what my responsibility was as the cartoonist of the now quite popular strip. To this day I recall the exact words of that conversation;

“I don’t think you realize how much power you have.” Hunt said to me as I scoffed at the prospect. “If you were to draw a cartoon saying that the students should break out all of the windows in the University Center, the next day I would be getting calls from security telling me that windows in the UC were broken.”  I was stunned. “Oh God President Hunt,“ I gasped, “I’d NEVER do anything like that!” He just leaned back in his chair and looking at me over that huge snifter of iced tea that he always had on his desk he smiled and said, “Exactly. That’s why you’re the right person to be doing what you’re doing. Our university is going through growing pains, and we’ll be going through them for a long time to come. It’s better to have the students taking out their frustrations by seeing you lampoon me and things in that cartoon strip rather than taking it out on our property or my security staff.”

That day I came a long way from that depressing Valentine’s Day when the first strip came out and ended up soaking wet in the gutter. 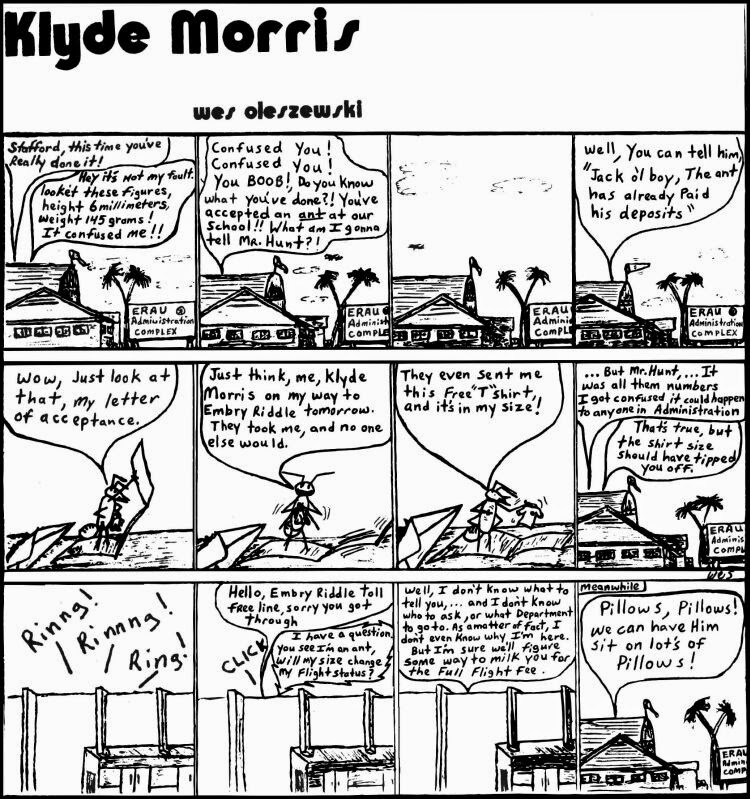 Posted by Wes Oleszewski at 1:33 PM