Excerpt from "ERAU in just 10 Years" a work in progress

My introduction to the T-303 Crusader came on the same day as my face-to-face introduction to the new president of Embry-Riddle, General Ken Tallman. It was the first day of Skyfest 1985 and I had elbowed my way into serving a shift or two as one of the "demo pilots" for the static display of the university's newest multi-engine trainer. The aircraft was selected to phase-out the Piper Seminoles which, after some half dozen years of service were rapidly wearing out. My job that day was simple; stand there in my Flight Team flight suit and talk about the aircraft to curious folks who happened by. The only problem was that neither I, nor my teammate Colin had ever seen the aircraft before! Thus, both of us hid inside for a while and quickly studied the manual for speeds, range and altitudes- the rest we just faked. It's an important skill for any professional pilot- the ability to act and look like you know what you're doing and the general public will never know the difference as long as you garnish it with a few good flying stories. 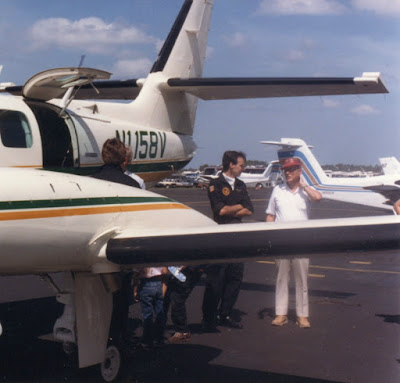 Me with the display T-303 looking like I know what I'm talking about.

While Colin and I were standing our shift with the Crusader, the university's Chief Pilot Paul McDuffee came walking up with our newly selected university president, General Tallman as well as Mrs. Tallman and just for good company some sales rep. from Cessna. It was apparent that McDuffee had briefed General Tallman about my protracted efforts to get through ERAU as well as my cartoon strip and it's havoc potential.

"This is the guy I was telling you about..." he began as he introduced me.

I shook hands with the General as McDuffee asked what I thought of the Crusader?

"I love it," I stated almost reflexively, "I can't wait to start flying it."

"So, you're going to sign up for the multi-engine route in the Crusader?" McDuffee led.

"Heck yeah," I replied, "even if I have to wait a trimester to get in it."

Then McDuffee asked a question that fits the old aviation phrase "If you're not gonna like the answer, don't ask the question," and he immediately regretted asking me this one.

"How many of these do ya' think we'll need?" my chief pilot asked- right in front of the new president and the Cessna sales rep.

"Four," I responded without any hesitation, "at a minimum, five at best."

"No, no, no, no," McDuffee sputtered as if trying to stamp out a brush fire, "We're only getting two."

"Oh no, no... we're only getting two." McDuffee insisted as he glanced toward the now grinning Cessna sales guy.

"When the pilots on this flight line get a load of this aircraft," I said assuredly, "they'll be lining up to get into that flight course and dropping out of the Seminoles if they can- you'll need at least four to accommodate that crowd."

Looking over I saw General Tallman grinning widely- it was clear that he agreed with me. I thought that the Cessna sales guy was going to have a reflex orgasm as well.

Doing his best to recover, McDuffee decided to continue the tour elsewhere. Reaching out the General shook my hand saying it was good to meet me and he winked. As they walked away Colin asked what that bullshit about getting only two Crusaders was all about?

"We're gettin' four," I assured my teammate, "you just watch." 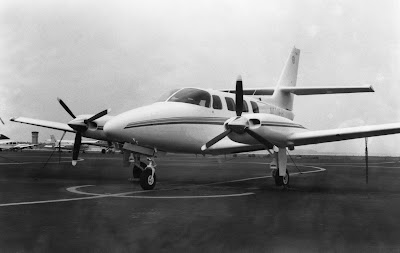