What're you laughin' about?

Imagine if you will a crowd of 2,500 students registering for the same two dozen or so freshman classes, on the same day, in the same building while another 2,500 upperclassmen attempt to register for their own classes. Now imagine that the school never really planned for this influx of students and really did not have enough teachers or classroom “sections” to handle these students. Next add to it the first-come-first-serve, festival seating manner in which each student was going to register. Now you have the situation that developed 40 years ago today at the Embry-Riddle aeronautical university’s fall registration… and I was in that crowd.


I made the mistake of getting to campus at just after 9am, figuring I was early. At that time the line for registration extended out the front door of the University Center (UC) and around the building. Of course we were lucky because the Florida sun had been replaced with overcast skies and light rain. As I stepped into my place in line the line itself rapidly continued to grow until it extended the full length of the UC and around the north side of the building. 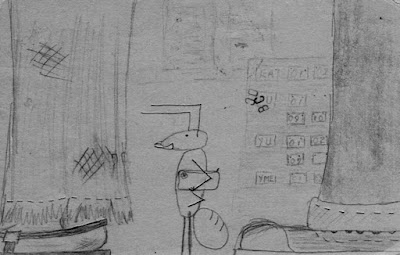 
By noon I had actually gotten through the front door and into the building itself and then the line slowed down. You see the systemic problem was that when you had 2,500 freshmen seeking about 24 classes that equates to about 104 students per class and if those classes are divided into sections, or the hour and classroom and teacher, and each section is to contain no more than 32 students it all can equate to about 3.25 sections for each class. However, when you throw in students cherry picking their times and days for each class and the conflict resolution of each student’s schedule a large monkey wrench looms over the plan. Next, when you figure that this is all done manually with pencil and paper and each student is required to write a schedule that must be conflict free you have students bouncing around before finalizing. Worse yet, as many of those students are in line at conflict resolution, sections that they have chosen close because other students have beat them to it. Now they have to go back and do it all over again. That process slows the whole show down to a speed that a snail can beat.


Standing inside the building we could now hear the P.A. system where they were making the frequent “closed course” announcements, “Closed course… MA-111, section five…”  and so on. Those announcements would soon become the bane of our existence. We heard it over and over and soon it came at an increasing rate.


As we waited, the endurance test of being in that line led to camaraderie. Before long we entered into a gentleman’s agreement (yes ladies- it was mostly guys in those days. A quick survey of the 1978 ERAU yearbook, for example, showed just 64 female students of the approximately 2,100 student photos) that we’d hold the place of anyone who needed to go and use the rest room. Later we came up with the concept that if someone was willing to do a food run for a bunch of us, when he got back we’d not only have his place saved but he could go the head of the group. After gathering the cash for one of the food runs the runner left and the guy behind me asked, “What’s to keep him from takin’ off with our money?” I replied, “Darwin… because if splits the only place for him to go is at the very end of the line.” 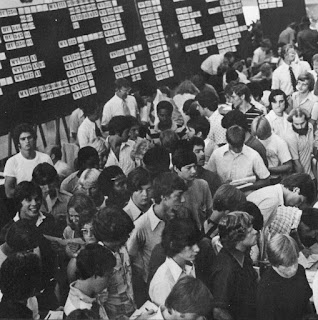 The insane crowd- note the black wall with the course cards in the background.
c/o Phoenix yearbook 1978
Eventually I got to the point where I could look up onto the flight deck and see the swarm of where registration and conflicts check was going on. There was a huge wall of black felt that contained cards marking assorted classes followed by cards with their open section numbers. For the classes that I needed there was almost nothing left and I still had at least another two hours or more in line. There were members of the teaching staff plowing through the crowd trying to help and every now and then one of the student assistants would pluck one of the section cards away and take it to the upper classman who would announce the closed course. It looked bleak for me.


Soon I spotted a familiar face in the crowd of people sitting in the dining room. It was Pat Kelley, a guy that’s I’d attended high school with in our tiny farm town of Freeland, Michigan! Pat was two years ahead of me at ERAU and had dropped in to see me and calm my apprehension a couple of days before I left for ERAU. Pat was in Aviation Maintenance Technology and was sitting in the UC playing chess. I asked if he’s already registered and replied that all of his classes were mandatory, so he would just wait until the nonsense was all over and get forced entries for everything… which is exactly what he did.

By the time I was nearing my turn to step into the madness the closed course guy began calling out “new section.” That meant that the school was opening up more sections for closed courses. This was not an easy task because first they had to find an instructor willing to take on the new section, then they had to find a classroom that was unoccupied and place that section in that time-slot. Yet, one after another new sections were popping up. 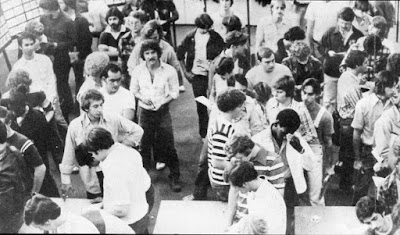 After more than six hours in line I finally stepped onto the flight deck in order to register. We were shoulder to shoulder trying to figure out a schedule on the fly. By that time my wish-list registration form was toilet paper as nothing that I’d put on it was actually there anymore. Some were working very hard to get what they wanted, I just scribbled out a section for every class that I needed without regard for time or day. I figured “What the hell, I’m gonna be here anyway and I have nothing better to do during the days between now and the end of the term- so any day and any time was as good as any other.” I jotted out my classes and a few back-ups and jumped into the conflicts line. Amazingly I went right through, but when I got up to the faculty approval, I heard them do closed course for my “Foundations of Aviation” course! “Damn!” I half shouted. But Mr. Wencel, who I recall was doing my approval, just glanced up, sighed “Don’t worry about it,” and made me a forced entry into that class. He signed me off and said, “Welcome to Embry Riddle.”


In the years that followed the administration at ERAU took steps to ensure that the fall 1977 registration nightmare did not happen again- or at least not on the same scale. For the spring trimester, for example, those of us who were left from the fall got to register early and that at least helped us. As the years passed the computer revolution did much to streamline the process. Yet still the students and especially the freshmen bitched- not knowing how much worse it could be. After my being in and out of school, (sometimes for as long as two years,) while working my way through ERAU, I found myself in 1986 as an orientation leader. In that role were we did our best to help the new students as much as we could. On registration day I was assigned, as an advanced flight student, to help the new aero. science students with registration. I was standing in line with one kid who waited for exactly eight minutes to have his schedule signed off by none other than Mr. Wencel. He took one look at the kid’s paperwork, crossed out two classes that were filled and two that were the back-up list and picked out one from the third back-up list and signed off the guy’s schedule. Of course the kid was a bit shocked because he didn’t get exactly what he wanted and he objected. “That’s what ya’ got,” Wencel told him half smiling, then he looked at me, winked and told the kid, “Welcome to Embry-Riddle.”  As I guided the still perplexed freshman out of the line he looked at his schedule and said, “This sucks!”

Then he looked at me and said, “What’re you laughin’ about?”
Posted by Wes Oleszewski at 4:19 PM