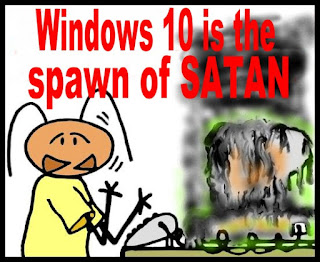 It's a constantly appearing, ever annoying "handy" pop-up window that wants to provide useless "Editing Tips" and I tried everything to kill it. I even went of Facebook and offered a free book to anyone who could kill it... some tried, all failed. Next one of those who was trying to help me connected me with Microsoft Support. That technician and I were online together working on it... no luck after one hour and 57 minutes of working it.
Finally he said that it was just a bug in my Windows 10, and the only way he figured I could fix it was with a fresh download of Windows 10... which I just did 3 days earlier.
May ANTIFA burn down Microsoft HQ.
If you really hate someone, do not wish death upon them, nor a kidney stone... just wish a Windows 10 bug upon them.
Posted by Wes Oleszewski at 7:15 PM