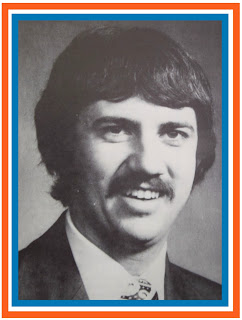 It is with deep sadness that I announce the passing of a long time friend.
"Ron Jay Scott" was his "air name" and it's what he liked to be called. He started his career in Saginaw, Michigan as a DJ at radio station WSAM in a time when I was just getting into rock music. We all listened  to 1400 "Big Sam Radio" in the early 70s and Ron Jay often worked the afternoon show.
Then I knew him as just a voice as did tens of thousands of Saginaw teenagers... until the Saginaw Gears hockey club hit town. Ron Jay took an interest in hockey and soon became infected with the hockey bug. The new franchise needed all of the local help that it could get and that soon led Ron Jay to being a part-time worker for the team. He soon grew his role and went to announcing. By the 1975-76 season he was doing "color" calling during the game broadcasts while still working for WSAM, which had become "The Home of the Gears." The following season he sometimes filled in for team announcer Al Blade and formed a good chemistry with full time announcer Wally Shaver. On May 11th, 1977 he was side-by-side with Wally calling the third period of  game 7, Turner Cup finals as the Gears won their first ever IHL championship. I actually have that recording that I later shared with him. During that season, me being in Zamboni alley with my dad and Ron Jay working for the team, I bumped into Ron Jay often and we traded quips about hockey and the team. He was nice to everyone and we all thought he was cool.
Our paths separated the following season as I went to Florida to become an aviator and he soon took over working as the Gears full time game announcer and publicity man. It was in that role that Ron Jay won a second Turner Cup with the Gears and even got a championship ring out of it!
In 2002 I started a web site for the Saginaw Gears and about three years later Ron Jay contacted me through it. Now it was me, interviewing him. I found out that he was really into trains and he found out that my dad, who he knew only as the Zamboni driver, was actually a career railroad engineer. He kicked himself in the butt when I told him that back in the day all he needed to do was ask and dad would have taken him for a train ride. Since my dad had passed on by that time I packed up a care package for Ron Jay consisting of all of dad's old railroad training manuals and all sorts of other railroad stuff. Dad would have done the same. 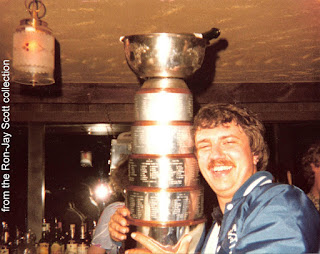 Ron Jay with his second Turner Cup
Of course I got busy writing books and Ron Jay got busy being retired. However, he always hung around hockey and had spent a good deal of time announcing for the Notre Dame hockey team.
It always seems that when you haven't been in touch with an old friend for a protracted period, that's when we lose them. This post is for you Ron Jay. You are missed.
Posted by Wes Oleszewski at 7:57 PM