MAGNUM IN THE FRONT WINDOW

During my time flying Falcon 20s I was never afraid that some bird or even a meteor was gonna come through the cockpit windows. The reason for my lack of concern was rooted in doing that “D” check on a 20 back in the summer of 1985.

As I said earlier, during a “D” inspection anything that can come off, must come off and everything that can come out, must come out. Thus, the windows in the cockpit have to be not only removed, but completely replaced. Now, you’d think that this process would involve removing the screws around the panels that overlap the edge of the window and the aircraft’s skin, but it’s not that simple. 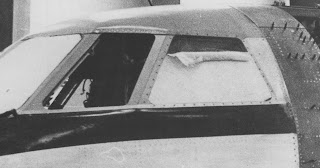 Just one of the cockpit windows on a Falcon 20 would be surrounded by panels fixed in place by as many as 40 screws in total. And, just to make the job more fun, those screws were not all the exact same length. In fact there were about four different lengths in assorted areas. So, removing the screws was not a problem. Putting the darned things back in the correct holes to properly secure the new pane was the real puzzle. The answer that the guys in Hangar 6 came up with was pretty handy. It was a series of four plywood boards each of which had the outline of an individual Falcon 20 cockpit window drawn on it. Around the window drawing was a series of holes located where each screw on the actual window frame was located. Then, when you removed a screw you simply placed it in its respective hole to wait there until it was time to secure the new window. That way every screw went into its correct location.

Brilliant!... Until some klutz Polak kid who is working under the shop certificate isn’t watching where he’s going and trips over one of the boards and knocks out a bunch of the screws!

Well that idiot for a day happened to look a lot like me, occupied the same space, and rode my bicycle to work every day. All I’ll admit to is that I spent the remainder of an afternoon matching 32 screws to 32 holes… plus a half hour of overtime. But, I needed the money for college.

Check out my WWII book!

After all of the panels are off and the window panes are left unguarded and the window heat disconnected the next task was to actually remove them. On this bird they were glued in place, probably in France… God knows when… so, knocking them out should have been no problem.

Since the windows are a part of the pressure hull, they are “plug” windows. So, the only way to get them out is the push them in. Not one would budge, and trying to pry on the seam would damage the airframe surrounding them. The final solution featured a mechanic standing on the cockpit roof (yes, you can do that on a Falcon 20- they’re built like tanks) with an eight pound no-bounce. (For those of you not familiar with the term, a “no-bounce” is a rubber hammer, and in this case it was a rubber sledge hammer). Starting over the center window and straddling the cockpit so the window was between and below his feet, he raised the no-bounce high and gave the window a hefty smack! Nothing happened, in fact the sealant around the pane didn’t even show a crack! Again he raised the no-bounce over his head like a Jedi of jet fuel and slammed it against the pane. It mocked him.

I don’t recall how many hits it took but soon the attention of everyone on the crew was on him as we cat-called and goaded and he shouted naughty words and smashed harder and harder. I was starting to take bets on the window, because he was beginning to look tired. Yet, eventually the sealant began to fracture and the accursed pane of clear plastic budged. After more sweat and foul words it finally vacated its assigned position and dropped into the cockpit. Then some smart ass shouted, “Great! Only eight more to go!” Fortunately the mechanic with the no-bounce didn’t have the strength left in his hands to strangle me.

During lunch the following day we were passing around the windows and making comments. Joining us was the representative from Falcon Jet. The same mechanic who had fought the battle to get that first window out asked if he could have it? The guy from Falcon Jet said it was junk anyhow- so sure he could have it. I asked if he was gonna mount it on his wall? He replied that the heating threads that were laminated into the layers of poly-plastic-epoxy-carbonate-clear-fiberglass-PFM were supposedly made of “gold!” He figured to go home and pry it out.

Of course the next day he came into work again mocked by the window. He said the damned thing just would not come apart. That day at lunch he was telling us how he’d gotten so frustrated with that damned piece of window that he took it out behind his house and shot it with his .357 magnum! We all cracked up and asked if he could bring it in and show us? It turned out that he had it right outside in his pickup truck- so he went out and nabbed it for show-n-tell.

It was fascinating- the slug, fired from about 12 feet away and hitting nearly dead center, had penetrated about half way into the pane and then mushroomed. It left a slight bump on the inside, but didn’t deform the pane in any other way. This got the attention of the guy from Falcon Jet who asked if he could have the pane back? He was flying back to the home office the following day and wanted to show it to some of the engineers. Later he told us that they shipped it back to Dassault for study. He told us that no one had ever done that to a Falcon Jet window before.

Years later when I was done with Embry-Riddle and had gone into professional flying I found myself seated behind those cockpit windows in Falcon 20s. Even at .76 Mach I never feared anything coming through those windows. Not even a goose holding a .357 magnum pistol.

This story brought to you by my best selling aviation-spy novel "INVISIBLE EVIL" check it out here!

Posted by Wes Oleszewski at 4:32 PM