Folks- If you're enjoying this series, please check out Wes' first novel and 25th book INVISIBLE EVIL it's got lots of aviation in it. Get an autographed and personalized copy HERE

Although we had everything needed to totally disassemble the Falcon 20 in the “D” inspection, there were some tasks that simply had to be contracted out. One of those was the dropping and cleaning of the fuel tanks.

For those of you who may be unfamiliar with the fuel tanks on aircraft such as this, in the case of the wing storage, there really is no “tank” at all. The fuel is housed inside the wing itself and resides among the spars. 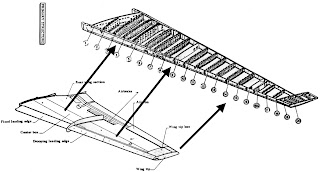 The Falcon 20 does indeed also have two actual tanks in the aft fuselage, but most of the cleaning process in the “D” inspection involved the wing tanks. For that Aero Services brought in a specialist in wing tank cleaning. That was a fellow by the name of Leroy Toro and he was said to be the master of aircraft tank cleaning. He was contracted to fly in from south Florida with his crew to get the job done. 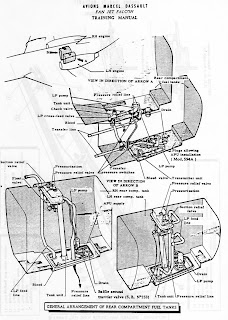 By 1985 I had already spent four years living in Florida and working assorted minim wage jobs in the effort to work my way through Embry-Riddle. It was the early 1980s and the national recession made getting any job in Michigan impossible until late 84. In Florida, and especially Daytona, it was fairly easy to gain employment. The hotels along the beach side alone hired anyone right off the street. Thus you often found yourself working with some really rag-tag people. The establishments that needed this ready labor usually did not hold back the first week’s pay, there was no state income tax and some places, such as Kmart paid in cash every week. Transients would work for one or two paydays and then either get fired or just move on. I’d been hired on the labor crew at the Daytona Plaza hotel in January of 83 just by walking in and asking for a job. They hired seven of us that day- by the next week there was only me remaining. Of course they hired six new faces. Three months later I’d seen a lot of the rag-tags come and go and I was actually a senior employee. Still a lot of dirty jobs got done and the weekly cash helped me pay for some of my school and feed myself until I found it worthwhile to head back to Michigan for a year. Yep- I was just as rag-tag as everyone else. Thus, when Mr. Toro brought his crew into Hangar 6 I easily recognized a bunch of my fellow Florida rag-tags hired on to do a very dirty job. 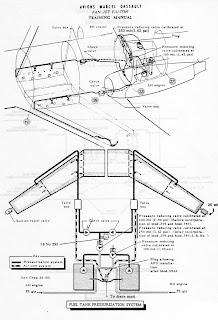 As Mr. Toro and our general manager went over the specifics of what his crew was going to do, our GM thought pensively for a while and then vanished into his office. Later that day he came into the lunch room and told us all that everyone was going to get a four day vacation! This was because one of the largest steps in the tank cleaning process involved actually spraying CH3C(O)CH2CH3 into the tank spaces after they had opened them up. What’s CH3C(O)CH2CH3? It’s the chemical formula for methyl ethyl ketone, or MEK. Anyone working in most industries or especially paint and body shops knows MEK as a great solvent and when exposed to it in modest amounts the worst it will do is make your eyes burn or your throat sore. But, when sprayed it can, like any solvent, pose serious health hazards and can be highly flammable. Aero Services was taking no chances. I  immediately began planning my summer trip up north to camp and watch the lakeboats go by at Sault Saint Marie.

Before they could spray, they had to drop the tanks. Normally, the inspection panels on aircraft are set in place with screws that are hand-tightened and easily removed with a speed handle. That is, unless some jackass before you has decided to use an air wrench and over-tightened them. You can usually tell when this has happened by the presence of a tell-tale tornado scratch mark next to the screw head. That says that the screw will likely strip and have to be drilled out. It also means a lot of time spent on one stinking screw- especially if the drill bit you’re using to make the tap hole breaks off in the hole! Now you’re talking a piece of hardened steel stuck in your hole and overtime on your time card… plus lots of swearing. The screws holding those fuel tanks together were not intended to be removed routinely, so their screws are not only over-tightened, but also painted in place.

Mr. Toro’s tank crew used plenty of elbow grease and just as much profanity as they put in 12 hour days to get those tanks dropped. Once the parts were on the hangar floor and the crew was ready to begin the spraying, I split with no regrets. The stuff they were cleaning away was a sealant that had been used during the construction of the wing in France. The sealant, PR-1422 and PR-1431, was a dark brown color and when you picked at it with your fingers it seemed hard a crusty. I wondered to our A.I. how some of that couldn’t help but break away and contaminate the fuel? He simply replied, “That’s what filters are for.”

By the time I’d spent four working days plus a weekend up north relaxing it was time to get back to Hangar 6 and the Falcon 20 that looked a lot like a skeleton. There were no windows, the cockpit was empty- including the entire instrument panel, every space that could be open was now a gaping hole, both engines were off the airframe and resting on racks, the rudder and every other control surface was off… but those tanks were all sealed up nice and pretty. Mr. Toro and his crew had done their job.

Of course they left us with a hangar that smelled like MEK for the next week or so. 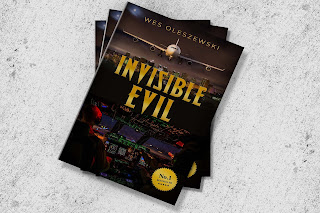 This saga brought to you by Wes' 25th book- the aviation, spy thriller INVISIBLE EVIL ! If you're into aviation, this book will draw you in.
Get an autographed and personalized copy HERE