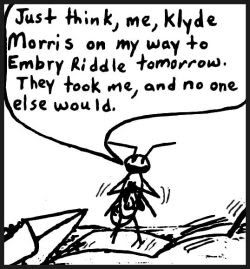 Meanwhile, Dan “the man”, who was working part-time on the university’s student newspaper, “The Avion”, had approached the newspaper’s staff with the idea of their taking a look at Wes’ work. A meeting was set up and the cartoonist, scrapbook under arm, was reluctantly dragged into the newspaper office. As the book was passed around among the staff their reaction was pure delight and loud laughter, with the exception of one single individual- Ray Katz, the Avion editor. Katz, read the entire scrapbook and never cracked a smile, then stroked his beard pensively and said to Wes, “Here’s what “we’ll” do... you draw your ant life size, and “we’ll” call it the adventures of Empty Ripple...”

Wes had always thought that the frames of a cartoonist belonged to the artist alone, and that person would rise or fall based on their work alone. Having some slob telling him how the cartoon would be written, what it would be called plus having the idea be a work of pure crap was more than Wes wanted to deal with. Closing his scrapbook, Wes began polite, but a swift departure from the Avion office. Fortunately, the other members of the staff realized what a boner Katz had just pulled, and as Wes was passing through the door, Jean Snyder, the Avion secretary, and Keith Kollarik, who would later succeed Katz as editor, grabbed him by the arm.

“You just do it any way you want sweety,” Jean whispered while giving a glance toward Katz, “and I’ll see to it that it goes in.”

“Right,” Keith added, “draw it your way, and bring it up here Monday afternoon, I’ll hold a spot for it and slip it in when the paper goes out. Katz will never know it’s in until it’s too late.”

That kind of scheming and scamming staff were exactly the kind of people that Wes wanted to be associated with, so he went back to his room and over the next weekend drew the first cartoon. In the three strips, Wes went directly for the throat introducing his ant as a real ant that had been accepted into the university by mistake after filling out the application form using metric figures for height and weight which the admission people had mis-read. In 1977, when new students were approved for admission to the university they were sent a free T-shirt, and the ant had gotten one that was actually his correct size. Wes lampooned and named both the director of admissions and the university president in that first strip- quite a risk for second semester freshman! In those days, Jack Hunt, the long-time university president ruled the world of Embry-Riddle and could have swept Wes away with less than a wish. Additionally, Wes found that he could use a smattering of “adult language” in the student newspaper, which he knew would add a note of additional controversy and draw needed attention to the new strip. On Monday afternoon, February 13th, 1978, Wes boarded the bus for campus with his first cartoon, which was not yet finished. He had the ant character, the setting, the jokes and even had his roommate Jeff Barrow proof read the strip to correct Wes’ spelling errors, but he had not yet thought up a name for the ant! For the entire weekend he had been working on names, but none of them worked and Wes was certainly not about to use “Empty Ripple”. As the bus made the turn onto Clyde Morris Bvd, where the university is located, Wes saw the street sign, and that name “clicked”. Changing the “C” to a “K” Wes penned the name “Klyde Morris” into the blank space that had been left in the sixth frame where the name needed to go.
Posted by Wes Oleszewski at 10:31 PM