THERE I WAS: jumpseat weirdness

After going through an aviation career and pretty much done it all from CFI to Airline pilot to Corporate Pilot with a touch of mechanic along the way, I managed to experience a lot of stuff and thus have a ton of "There I Was" stories, just like every other pilot. Having a blog, and never intending to go back into any airline or corporate operation in the future, however, allows me to publish these stories as they happened and not care one bit about who who thinks what about them. So- here is the first of my There I Was tales... 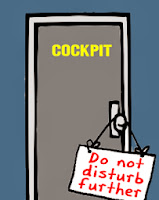 Looking back across my flying career, I believe that one of the tests as to if or not a professional pilot will become a good crewmember is how you handle normal weirdness. This as opposed to general weirdness and deeply weirdness as well as We Are Gonna Die weirdness. Normal weirdness is the stuff that, by my definition, happens with some frequency yet always goes away.

One of the greatest perks, if not the greatest perk that you get as an airline pilot is the jumpseat privilege. This takes place when your company has an agreement with another company to allow pilots to use the normally unused extra seat in the cockpit that is intended for training observation. It is called the "jumpseat" and is the means by which most airline pilots commute to and from work. In fact, much of the time you are not actually in the jumpseat itself, but rather, at the captain's discretion, you are usually told that you can, "just take a seat in the back" and thus you can occupy an unused passenger seat if any are available. Jumpseating is free of cost and allows you to simply go to an airport, find a flight going your direction and, if the jumpseat is available, get on and go. Frankly, it is the only airline thing I've ever missed after getting out of that business.

Getting the jumpseat is a process that depends largely on politeness, respect, pleasantness and following an unwritten series of rules. The old adage of getting more flies with honey is extremely true here. Without revealing any actual procedures here and for security reasons (Yes- there have been fake pilots who tried to jumpseat), I'll cover the basics as I used to do it. I'm sure a lot has changed after 9/11, but back in my day- it went like this... First you have to show ID and get some paperwork. Go to the aircraft door and ask who is the lead flight attendant- respectfully ask that person if you can speak to the captain. Next you have to go to the cockpit and meet the captain. Then you have to very respectfully request his or her permission to occupy the captain's jumpseat- the captain owns the jumpseat. I'd always make a smiling, yet formal statement "Captain, I'd like to request permission to occupy your jumpseat" or if the cockpit appears at first glance to be having a fun trip I'd ask "Request permission to plop my unworthy worthless butt into your jumpseat, Captain." while handing the captain my ID and paperwork. Having a spare set of ALPA wings pinned onto your ID often helps too. If told to "have a seat in the back," you NEVER just go sit down. You're best off to find the lead flight attendant and tell that person that the captain has told you to go sit in the back and then ask "where would you like me in your cabin?" Always keeping in mind you are only a guest... okay... a freeloader, but a polite freeloader at that.

And now the THERE I WAS part...

I'd just finished my first week as a bona fied airline pilot and was about to do my first jumpseat from PBI to BWI and home. I'd been well briefed by some of the other pilots in my company as to how to jumpseat, but I also made sure that everyone along the way knew I was new at it. The captain at first told me to go to the back, but I explained quickly that this was my first jumpseat and he instantly showed me how to deploy the cockpit jumpseat so I could "see the whole show." We blasted out of PBI in the 737 just before dusk and headed up toward BWI on a nearly 3 hour cruise. Before long it was dark and we were humming along at altitude on a smooth ride... a very smooth ride. The FO was doing a word puzzle on his map-board and the old captain was... asleep. I was keeping my mouth shut and my eyes wide open and could care less about the captain's snooze, I was just takin' it all in babe. I'd waited and worked a very long time to get this little free ride- for me it was a victory lap of sorts. Soon, however, the FO put away his word puzzle, turned off his map light and sat there scanning the panel for a while. Bonk... he's asleep too. So there I sit, as rookie as rookie can be, a brand new DHC-7 FO and I'm the only one awake in the nose of this 737...

Every cockpit crewmember is taught that everything you say and often every move you make that produces sound will be captured and recorded on the Cockpit Voice Recorder (CVR) and you don't want anything goin' in there that you don't want goin' in there. So the CVR is always in the back of your mind- at least it was always in the back of mine. In this case, with that in mind, I pondered what to do and shortly came up with the perfect solution. I took the toe of my shoe and gave the FO's seat a sharp whack down by the base. It was enough to wake him up as he'd only been out for a minute or two. His head popped up straight and he looked at the instruments instinctively, then he turned and looked silently at me. I just raised an eyebrow and shrugged. Then he turned his map light back on and looked over at the captain who could have easily been mistaken for being in a coma. The FO looked back at me with a big open mouth smile and his finger pointing happily at the sleeping captain in a "get a load of this guy" motion. Then he mimed me a "Shush keep quiet" with his finger and lipped "Watch this!" A moment later in a loud voice the FO blurted out "HEY BILL!" The captain snapped back awake. "Didn't you used to have a place down there?" the FO asked in the blind. "Uh, yeah..." the captain responded as if he's been awake the whole time, "right on the water, had a terrific dock." As the captain panned his vision around he saw the two of us silently laughing in tears. We all stayed awake to BWI and I learned a lot about being an airline pilot that evening.

Anyone who tells you readers who are non-airline pilots that events such as this never happen, is feeding you a line of total bullshit. Airline pilots are professional, able, competent, conscientious, and HUMAN. Airline pilots out there who are reading this, you know the way it is- stuff like this does not happen` all the time, and does not happen on a regular basis, but it happens. You all have a bag full of similar stories. It's just one of those normal weirdness events.