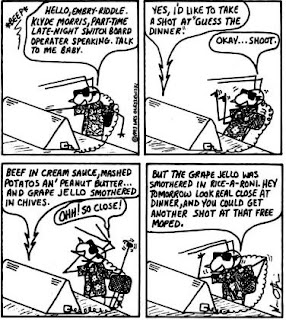 Now all he needed to do was sneak the strip past Ray Katz and his cartoons would be read... this time by the entire university. As planned the strip was delivered to the Avion staff, and as promised, they sneaked it into the newspaper without Katz’s knowing. On February 15th, the first Klyde Morris appeared on the bottom left corner of the editorial page, a spot that the strip would occupy for the more than a decade.

Wes's personal note: The day that the first cartoon appeared, in fact the hour that the newspapers went out, I went into my first class of the day- and everyone had a paper and had it open reading... I watched the guy in the row in front of me as he read the front page, then turn to my page... and he read right past my cartoon with zero reaction and went on to the frat. page! So I looked at the guy down the row from me... same thing... read right past my cartoon. In fact it was like everyone did not even notice the cartoon at all! After class I returned to my room and proceeded to get dejected. That evening I got on the bus and headed to campus for dinner... it was raining and gloomy. As I stepped off the bus, there in the wet gutter was a soaked Avion open to my cartoon. It was not a happy evening- as I mistakenly thought that no one liked my work. I was more than a little surprised that the Avion asked for more cartoons, and oddly, never really thought of the cartoon strip as something that a lot of people liked.

The strip was an instant hit. The university’s students, administrators, employees and most importantly, President Hunt all loved it and Ray Katz could never again entertain a thought of touching Wes’ work.

Over the next few years, Wes began to hit a remarkable series of editorial home runs with Klyde Morris. Targets were hit in their most sensitive locations and Wes’ sharp wit caused a great deal of deflation among the self-important blow-hards. Student gripes were worked into the strips, administrative misconduct was placed in the spotlight and just good old fun was made of the entire university system. Additionally, Wes found the discipline in grammar and spelling that he had never had impressed upon him in public school, and his English dysfunction was repaired through Klyde Morris. In fact, looking at his transcript will show nearly straight “A”s his English courses... he only wishes he could have done that well in all of the other classes. In the fall of 1979, unfortunately, Wes ran short of money and was forced for the first of many times to forgo his return to campus in order to remain home and work to earn enough money to return to school. This was the beginning of a pattern that would see the cartoonist in and out of school for the next nine years as he worked his way toward a degree. In that autumn of ‘79’ hiatus, an odd thing happened with the Klyde Morris cartoon- the Avion editors did not want the strip to be absent from the paper even though the author was not on campus, so they demanded that Wes write and send in his cartoons while he was not in school. For that reason, although Wes was sometimes out of school for as long as two years at a stretch, Klyde Morris continued to appear in the Avion. Through the years, the character matured and evolved. Features such as the “late night, part-time switchboard operator”, Klyde Morris’ own disc-jockey like alter-ego, became a recurring standard in the strip.
Posted by Wes Oleszewski at 10:41 PM